The peace Beth Matthews had finally found was shattered by her new next-door neighbor.

She’d been alone since her divorce and had found a strength within herself that she’d never suspected.

Searching for peace, Joe Steel wanted to move from the city to the quiet town of Lakeside.

He hadn’t expected to meet the woman of his dreams living right next door.

Beth was everything he’d spent his life searching for and he was determined to make her his submissive.

They’d barely begun when her car crash changed everything.

Joe understood Beth’s reasons for trying to push him away, but he loved her and had no intention of going anywhere. 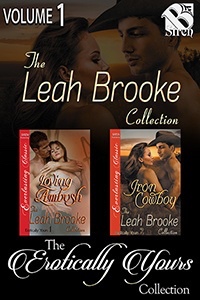 Beth finished her grapefruit and coffee and washed her dishes before going to take a shower.

She knew she would get sweaty while she cleaned, but her eyes felt gritty from lack of sleep, and she hoped a hot shower would put her in a better mood.

Dressed in denim shorts and a bright pink T-shirt, and with her wet hair piled up in with a clip, Beth stripped the bed and started the laundry, drinking another cup of coffee before she started to clean.

Making sure she couldn’t be seen, she peered out the window, surprised to see that not only had all worked stopped but the men had all gone.

The number of trucks remaining and the sight of the two saws still standing in the yard told her that they would be back, but in the meantime, she planned to enjoy the silence.

She started on the bathrooms, cleaning them until they sparkled, planning to wait until they started making noise again before using the vacuum.

She’d just started on the kitchen when a knock sounded at the door.

Irritated at the interruption, especially when she suspected that she’d open the door to find Phil standing on her doorstep, she clenched her jaw, cursing under her breath.

“There’s no way to get any peace around here!” Dropping the bucket and cleanser she’d been using on the kitchen floor, she headed for the front door. “Phil, I told you that I’m not interested—”

She yanked the door open, snapping her mouth closed when she saw that the man standing on her doorstep wasn’t Phil.

Sucking in a breath, she froze and stared at him, her mind going blank.

The sexuality he exuded made it difficult to breathe, and she found herself pressing a hand against her fluttering stomach, taking a deep breath.

He even smelled expensive.

Holding on to the door for support, she stared into brown eyes that glimmered with flecks of green and gold.

Dark brown hair, just long enough to brush the collar of his T-shirt framed a face too masculine to be handsome, but somehow was, the streaks of gray at his temple only adding to his appeal.

He had high cheekbones and a strong jaw, and lips that promised incredible pleasure, his bottom lip fuller than the top, and she found her own lips tingling with the anticipation of feeling them against hers.

His eyes glittered with interest and a confidence that unnerved her.

He smiled slowly, another of those knowing smiles that told her that he knew exactly what his presence did to her, a smile that instantly reignited her anger. “Good morning.”

Stiffening, she clenched her jaw, reining in her temper and giving him the cool tone she’d perfected a long time ago. “Good morning? I wouldn’t exactly call it that. A good morning would have been if I could sleep in on the first day of spring vacation.”

He had the grace to grimace, but it only drew her attention to his lips. “I’m sorry about that. I understand it’s been going on for some time.”

His deep voice had a seductive quality that wrapped her in a gossamer web of warmth and desire that had her fighting for calm.

Aware that her nipples had beaded, she stiffened and crossed her arms over her chest. “Yes, it has. Even on weekends, which is especially delightful. Saturdays and Sundays.”

His eyes flickered briefly with anger. “I know. I’m sorry. I just found out this morning. It won’t happen again. I brought—” He lifted a box she hadn’t noticed before, a box from the local donut shop.

“No. Thank you. Please tell those assholes to keep it quiet. Good-bye.”

Shaking by her own response to his presence, she slammed the door, leaning back against it and struggling to catch her breath.

It had been years since she’d felt anything even resembling desire, and it had never even been close to the bubbling heat now flowing through her veins.

Slowly sinking to the floor, she wrapped her arms around her knees and took several steadying breaths, which did very little to steady her.

Listening for any sound, she sat that way for several minutes, stiffening when she heard his car start from her driveway.

Jumping to her feet, she rushed toward the kitchen window, peering out from the side so he couldn’t see her.

Keeping a hand pressed to her belly, she watched him through his windshield. After sitting motionlessly for several heart-stopping seconds, he unexpectedly lifted his gaze to zero in on hers through the window.

With a gasp, she hurriedly stepped away, tripping over the bucket of cleaning supplies and landing hard on her bottom.

Bringing her knees up, she wrapped her arms around them again and listened for his car to drive away, her heart pounding.

Even after she heard his car pull out and she got to her feet to watch it disappear down the street, it was several minutes before she drew a steady breath.

Realizing that she’d made a fool of herself in front of him, she inwardly cursed, promising herself that she’d be better prepared if she ever encountered him again.

Joe tugged her nipples, slightly increasing the pleasure. “Spread your legs and keep them spread. No talking. If you obey me, I’ll allow you to come.”

Beth stiffened and slowly spread her legs again, for the first time considering that he would really deny her.

“I see that you finally realize that there will be consequences for your actions. If you interrupt me again tonight, I’ll deny you. I’ll take you to bed without letting you come.”

He closed his fingertips over her nipples again, squeezing lightly. “I’ll take you to the brink again and leave you hanging.”

Beth stilled when he released her nipples, sucking in a breath at the sensation of blood flowing back into them.

Joe circled her, running a hand around her waist and back as he did. “I’m going to explore what belongs to me, and I won’t tolerate any interference. I’ll go as slowly as I like, and nothing you can do can speed up the process. You’ll stay still and quiet.”

Sucking in a breath, Beth fought for composure and waited.

Expecting his touch on her slit or nipples, she stiffened at the feel of his fingers on her ankle.

Without speaking, he worked his magic up one leg and down the other, finding every sensitive spot.

She’d never really considered the backs of her knees especially sensitive, but she found herself fighting to remain still when he focused his attention there.

When he worked his way to her inner thighs, she began to tremble with the effort it cost her to keep her legs parted.

She waited for him to speak, but he didn’t, even as he ran his fingers up her inner thighs, slick with her juices.

Her stomach muscles quivered beneath his fingertips as he continued his journey, her pussy clenching with awareness and the need for attention.

Shock had her stiffening when he ran a fingertip back and forth over her scar, but the sudden attention to her nipple wiped away all embarrassment.

She sucked in a breath when he brushed his lips over her scar and felt him rise to stand in front of her again.

“Every part of you is beautiful and mine.”

Beth whimpered, no longer self-conscious about her scar.

Only Joe could make her feel so beautiful.

Her breathing became harsh and labored when he focused his attention on her nipples, the effort to remain still becoming more intense.

He brushed his palms against her nipples before closing his fingers over them again.

She cried out when he tugged lightly, throwing her head back, a wailing moan escaping when he squeezed harder and tugged again.

When he released them, the ensuing rush of blood back into her nipples turned her knees to rubber.

Her pussy clenched again, releasing more of her juices, while her clit throbbed with the need for attention.

Without warning, he thrust a finger into her pussy, and she found herself hanging by her arms when her knees gave out completely.

His bare foot touched the inside of hers, forcing her to spread her legs wider. “Brace yourself. Plant your feet again.”

Shaking, she sucked in a breath and obeyed him, her new position keeping her arms straight over her head again.

The realization that he’d already known that he would do this to her when he lowered her arms told her just how well he’d planned every step of his decadent assault.

She couldn’t hold back her cries as he pressed against the inner walls of her pussy, her cries becoming louder and more desperate when he focused on a particularly sensitive spot.

His firm caress sent her arousal soaring, her juices escaping to coat his fingers with each clench of her pussy.

Fire raged through her, and she found herself racing to come, crying out in frustration when Joe abruptly withdrew his finger.

When she felt him move away, she closed her legs only far enough to straighten them and regain her balance, careful not to close them too much.

When she felt the material of his pant leg against her back, she automatically arched her back, expecting him to take her from behind.

More moisture leaked from her pussy in anticipation, her entire body shaking for the orgasm that remained just out of reach.

“Hold on to the chains.”

She took several shaky breaths and lifted to close her hands around the chains, then held her breath in expectation.

She felt a hard arm coming around her from behind, pressing against her abdomen and lifting her off her feet.

Bent over, with her ass behind her, she moaned in anticipation of his thrust, crying out when a cold, slick finger thrust into her bottom.

Her toes curled, cries of shock and unwilling pleasure pouring from her with increasing desperation.

She’d never be able to look him in the face again if she allowed herself to find pleasure in something so decadent.

Pressing against her inner walls the way he had with her pussy, Joe caressed her hip. “You’re so tight here. I can’t wait to feel these tight muscles squeezing my cock.”

Beth whimpered at the effort of holding back, stunned that such a forbidden thing could give her so much pleasure.

“No.” Shaking her head, she whimpered, pleading with her own body not to betray her.

“No means nothing to me in this room. Use your safe word or be quiet.” 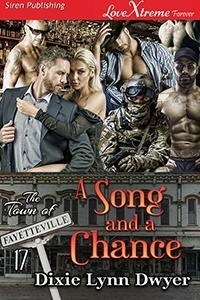