His nerve crashes to subzero when the highest bidder is the feared edge playing Dom, Nash Mage.

Nash bitter from a breakup with his mindfucking sub is looking for down and dirty sex and a pup to control. He doesn’t expect his auction prize and vanilla virgin, Paul, to earn his respect and melt his frozen heart.

Floggers’ Slave Auction is my second book written by H.C. Brown. It is a short, fast-paced book. Therefore, I was finished quickly. The story flows well. The scenes are described with great detail, making it easy to picture as I read. The storyline and characters were intriguing and kept me hooked till the end. As I mentioned above, I wasn’t fond of Nash and how he initially treated the subs. It was nice to see the change that Nash makes once he and Paul get together. In my opinion both Paul and Nash grew a lot and were better individually as well as a couple.

This is actually the second book in the series. I wasn’t aware of this till after I finished reading. Therefore, it can be read as a standalone but you may look at book one and want to start with it.

“Please, Master.” Sweat dripped off the house sub’s chin. “Ride me to hell.”

Nash Mage gazed down at the glowing, red marks on the sub’s naked body and lifted the flogger. He brought the customized leather down in artful, even blows. How he enjoyed watching a sub squirm under his touch. He groaned. So much soft, white flesh, striped red from the thin, leather straps made him hot as hell.

Damn, he loved the sharp intake of breath the sub gave with each, satisfying thwack. The raised welts were hot against his palm; he fought the desire to lick a soothing path along each stinging cut. Blood rushed into his heavy cock, pressing it hard against his tight, leather pants. He ground his teeth and stood back to admire his work.

“Please… Fuck me, Master.” The sub lifted his glossy ass in invitation, straining against the rope tying him securely to the bench.

With a snort, he turned to the table and selected a candle. He hated nothing more than a sub who begged. A sub should keep his damn mouth shut! No way would he give the annoying little wimp the pleasure of his expert fucking. He pulled his cigarette lighter from the tight, front pocket of his pants, flipped open the top, and lit the candle. He inhaled; the smell of hot wax aroused and soothed him. After allowing the melted wax to pool around the wick, he flicked his hand to send a shower of hot wax across the sub’s red striped bottom. He chuckled and set the candle in a holder that angled over the man.

He stood back to admire his handiwork. The candle flame hovered just above the subs balls, hot wax dripping closer with each second. Without hesitation, Nash turned on his heel and left the room. He ran both hands through his long hair, the thought of offering a cool down cuddle abhorrent to him. He had turned into an asshole and didn’t give a fuck. Why the hell did I decide to pick that particular house sub? The boy was not pretty, was well used, and not nearly submissive enough. No, he required complete surrender and the true lick-my-boots-and-ass devotion only an innocent could provide. Now he had a hard-on that only a sweet, submissive mouth would relieve. At this point in time, no one came close to fitting his requirements. He walked into the bar and scanned the room. He pointed to a house sub. “Go into my dungeon and untie the asshole.”

Later that morning, Nash leaned casually against the wrought iron railing beside the entrance to The Floggers’ Club. With rising disgust, he watched the retreating back of the disgruntled sub. His hand ached from the punishment he’d inflicted. He clenched and unclenched his fingers then stared at the indentation from the flogger handle across the palm. Damn, he would have to remember to wear his gloves next time. He lifted his chin and gazed at the sub limping away in the distance. He’d offered the sub no cool down—nothing—and broken every damn rule in the book. What is wrong with me?

Lately, no one could keep his interest. He missed Damien. Fuck, his boy had left him cold, no note, and no fucking reason. Nash sucked in a freezing breath. He needed new blood. One with trusting eyes and that smooth, porcelain skin that deserved to carry his marks. Steam billowed from the drains in the gutter, in spasmodic, white clouds. It would be a white Christmas this year. The weather bureau forecast snow for the entire holidays. Nash took the toothpick from his mouth and flicked it into the road. Fuck, he needed a cigarette. Just one drag would soothe the craziness. I am losing it big time. Hell, he usually had pride in his self-control. He snorted and turned to his friend. “His nose is out of joint because I didn’t want to fuck the weasel.” He rubbed his hands together. “I hate it when they start making demands. If I’d had a smoke, I’d have ground it out on his balls.”

“Giving up smoking is a bitch.” Roger Connell pushed his hands into the pockets of his leather jacket. He stared after the sub and grimaced. “And that bitch will be telling everyone you’re an edge player.”

With a shrug, Nash stared at the gray piles of snow banked up at the curb. He lifted his chin, met Roger’s hazel eyes, and smiled. “I beat the crap out of the little do-me queen. Bitch thought he could Dominate me—fat chance.” He ran his fingers through his hair. “Maybe I am taking it to the edge. I’m looking for the same thrill I got from Damien. What I need is a sweet sub who appreciates my skills.” He sighed. “I gave that whining bastard what he asked for and more, but no way was I going to fuck him.”

“It was consensual. That house sub wasn’t an innocent and he should have expected a good flogging with your reputation.” Roger slapped him on the back. “It’s freezing out here. Come downstairs, and I’ll buy you a drink.”

At the bottom of the steps, the comforting scent of wax and leather, laced with the enticing aroma of musky, male sweat, wafted over him. The owner of the club, Lance Booker, met them at the VIP section of the polished mahogany bar. Nash shrugged out of his long, leather coat and threw it to a house sub. He met Lance’s disgruntled gaze. “I’m not banned again, am I? Not when Roger has just returned from overseas—we have some serious ass to claim.”

“Four house subs have fled in a week, Nash. At this rate, we’ll need to put ads in the newspapers for replacements.” Lance balled his fists on his hips. “I think it’s time you put a collar on your own sub.”

Nash took a toothpick from a jar on the bar and pushed it between his lips. He straightened his shoulders and glared at Lance. “Fuck, that’s worse than getting married. I’ll flog and fuck who I choose when I choose.”

“Sure,” Lance growled, turned, and strode away. Two seconds later, he was back in his face glaring at him. “But keep your hands off the subs for the auction.”

With a grin, Nash met his gaze. Lance intimidated most members of Floggers but not him or Roger. “I hope you’ve got some pretty boys this year.” He grimaced. “I’m getting bored with the ugly asses around here.”

“I put a notice up in Handcuffs and Whips two weeks ago.” Lance gave him a slow smile. “I’m looking for a new sub too. There’s a group giving us the once over tonight.” He turned to go. “Try not to spoil Christmas again this year.”

With a sigh, Nash removed the toothpick and stabbed it into the ashtray. He reached for the bottle of bourbon on the bar and poured himself a drink. He threw it back and poured another. Yeah, yeah rave on. He turned to speak to Roger. His friend was staring at a delicious sub, who was dancing slowly, obviously lost in a world of his own. He nudged his friend. “Nice but unobtainable.”

“I’m working on it.” Roger turned back to the bar. “Fresh meat at two o’clock.”

He ran his gaze over the group of four men removing their coats in the foyer. Three were definitely subs—cropped hair and wearing plenty of metal. The group moved into the bar and paused as if undecided where to go. He moved his attention over the fourth man—young, barely legal, with a slight build—just the way he liked his subs. Brown hair with gold highlights curled around a cherubic face. A long, gold earring hung from one ear. Damn, the man had big, brown eyes and long, “dominate me” lashes. Nash whistled. “It must be Christmas. My sac’s full, and I just found Santa’s little helper.”

Turning around, Nash leaned his elbows on the bar to get a better view. The group moved to a table beside the dance floor. The sweet sub wore jeans low on his hips. He snorted. To wear jeans in Floggers was almost heresy. Two buttons undone at the fly showed the top of the man’s white boxers and a flat, smooth, hairless stomach. Nice. “The young one is mine.”

The boy’s black leather vest hung open to display an expanse of honey skin pulled tight over muscle. As the newcomer moved, he caught sight of his delicious, flat, biteable nipples. He groaned and his cock ached. I’ll fuck you ’til you scream. Dear Lord, the boy had that smooth, silken, tanned skin that drove him crazy. He wore no metal, no rings, nothing but the gold sparkling in his ear. The sub glanced around furtively keeping his long lashes at half-mast. An innocent. His mouth watered. “I think I just blew in my fucking pants.”

With a snort, Nash pushed away from the bar and stared intently at the young man across the room. “That’s the idea.” 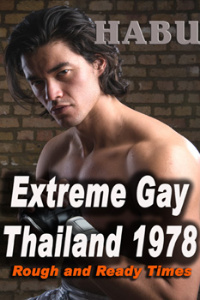