Lady Jessamy Cumberland values her independence, and she won’t give it up for anybody. Well, she might be persuaded to compromise for some steamy sex, especially if the sex involves her scrumptious butler and dashing neighbor, the duke…but it won’t be forever. Will it?

His Grace, Duke Gabriel Hartley, is a self-confessed pervert. A Dom by nature, the duke wants Jessamy and Liam in his bed, and he’s willing to do what it takes to get them there.

Will lust be enough when a mysterious threat arises?

“Why do you think you need to let me go?” Liam looked at Jessie curiously, his grey eyes grave with concern. His Scots’ burr always sounded so musical, his gravelly voice dripping over the syllables like honey.

Jessie drew a painful breath. This one was harder than the others, she assumed, because Liam had always looked out for her. And it didn’t hurt that he’d hated Christopher as much as she had at the end of her brother’s life.

“Lady Jessamy?” he prompted her, reminding her that she really had to do this.

“Liam, I’m sorry. I can’t afford to keep you on.” Jessie went for broke, figuring honesty was the only thing that would work with him. “Christopher burned through everything we have. Right now I have the manor and everything in it, but my reality is that I’ll have to sell some things—or everything—if I hope to survive. I have enough for myself, but I just can’t afford to keep anyone on. It wouldn’t be fair to you.”

Liam listened, his sensual mouth turning down at the corners. “Your brother spent everything?”

Jessie laughed bitterly, leaning back and running a hand through her long dark hair. “What he didn’t spend when he was alive has to be given to his creditors. He still owes a huge amount, and I need to pay it.”

Liam uncrossed his arms, leaning forward. “That bastard is still ruining you from the grave.”

Jessie sighed wearily. “Maybe so, but I have to deal with it.” She looked him squarely in the face, deliberately hardening her voice. “Liam, I’m sorry. It’s not like I have any other options. I’ll write you an excellent letter, make sure you find work with another family...”

Jessie trailed off as Liam held a hand up.

“You’ll do no such thing. I don’t intend to be going anywhere.”

Jessie stared at him, not sure where he was going with this. “Liam, aren’t you listening? I can’t pay you.”

Liam was shaking his head. “Tell me, Lady Jessamy, are you afraid of hard work?”

He’s lost his mind. That was the only explanation Jessie could think of. “Excuse me?” She injected her voice with every aristocratic shard of ice she could manage, which wasn’t inconsiderable. She was a Cumberland, after all.

“I’m just saying, Lady, that you must have worked incredibly hard to become a Marine. Doesn’t seem like you shy away from what’s difficult.”

Jessie gasped. “How did you know that?” She’d been so careful, not even her family knew she’d been at Parris Island.

Liam relaxed once more, crossing his arms again and smiling at her. “I know, dearie, because I work for MI6.”

Her life changed during that conversation. Liam had known—heaven knows how—that when Jessie was supposed to have been attending Cambridge getting a degree in something utterly useless, she’d actually been living in the United States training to be a Marine. It was the only thing she’d ever done just for herself, and it was a secret she kept close to her heart that she savored when things were tough. At least, she’d thought grimly to herself, at least I’ll be able to protect myself if my brother’s bookies come knocking.

Liam had revealed himself to be a handler for MI6. Jessie remembered how her mouth had fallen open and she’d goggled at him shamelessly. The perverse thought had crossed her mind that she was in the middle of firing James Bond.

Liam explained that he handled an agent who lived close by, and that his position as butler and groom to the Cumberlands gave him a perfect reason to be in the area without attracting suspicion. He’d informed her—he certainly wasn’t asking her permission—that he was going to stay on in the role of general manservant so he wouldn’t attract attention. And then he’d given her the shock of a lifetime.

Apparently, Liam’s employers had been aware of her activities with the Marines and they’d had an eye on her for some time. Liam offered her the opportunity to work for MI6, explaining that he’d become her handler as well.

Jessie had jumped at the chance, not batting an eye before saying yes. From that perspective, keeping Liam on as her manservant had been the best decision she’d ever made.

Jessie could barely breathe. Standing naked in front of Gabriel, beside Liam, who was also naked, was killing her. She was dying to do so many things! She wanted to look at Liam almost as much as she wanted to run her hands across his gorgeous body. But more than anything she wanted Gabriel to move. In this room, with these men, she could feel her inhibitions and fears slipping away. It felt totally natural to let Gabriel control their pleasure, and Jessie was bombarded by all the fantasies she’d indulged that had involved both men. Her heart was beating triple time with the realization that those fantasies were about to come to life. Something Liam had said was bugging her though, and she knew she had to say something before they moved on.

“Your Grace?” She risked Gabriel’s wrath, speaking when she knew he hadn’t given her permission. This was important.

“Your Grace, may I please finish my conversation with Liam? I promise not to take long.”

Gabriel studied her, and she could feel Liam tense.

Gabriel waved a negligent hand. “Go ahead, dear. I’d rather have all of this out in the open before we begin.”

Jessie turned to face Liam, sucking in a painful breath as she took in his naked form. Damn but the man was gorgeous. All planes and hard angles, Liam’s body made her mouth water. She felt her eyes travel lower and her breath caught. His cock, huge and hard, stood at attention. For me.

She shook her head to clear it. She was going to start drooling soon. “Liam, you said you love me. I just want you to know I love you back.” She grinned impishly at the stupefied joy on his face, turning back to Gabriel. “All right, Your Grace. I’m finished.”

Gabriel smiled indulgently. “Nicely done, dear. Now Jessamy…” And the Dom was back in full force, his voice dropping and becoming cool. “Please place yourself over my knee. I think fifteen swats is sufficient for your first time, and this time I’ll use my bare hand rather than a crop or paddle. I’ll count for you this first time, but in the future I’ll expect you to count for me.”

Jessie gulped, her eyes as wide as saucers. Fifteen seemed awfully big right now. Hesitantly, she lowered herself to the bed and crawled over to Gabriel, draping herself over his lap where he patted his knee. Her heart raced, and her pussy felt tingly. She bit her lip, not wanting Gabriel to know how much this excited her but desperately wanting him to begin her punishment.

“Very nice, dear.” Gabriel stroked the smooth globes of Jessie’s ass, making her cheeks quiver under his slow, sensual touch. “You’re welcome to scream, love. The only people who will hear you are Liam and I, and while I can’t speak for him, I know I’ll enjoy hearing the sounds you make when your pretty ass is spanked.”

With that, Gabriel brought his hand down on Jessie’s tender flesh. The loud smack echoed through the room, and Jessie cried out before biting her lip against the sound. Gabriel wasn’t messing around. His hand descended again, and Jessie squealed. He’d spanked her other cheek this time, spreading the burn all the way across her ass. And instead of spanking her right away, this time he rubbed her pinkened flesh, his big hand smoothing the heat from one cheek to the other.

Gabriel continued in that fashion, alternately spanking and rubbing her soft ass, sometimes delivering two or three spanks in quick succession and sometimes rubbing her cheeks for what felt like an eternity before delivering the next swat. It kept Jessie off balance, not knowing what to expect or when, and her pussy clenched in anticipation every time. The heat from her ass had spread quickly to her folds, and she was creaming so much from Gabriel’s punishment she was worried she’d leave a wet spot on his pants. She felt herself raising her ass, breathless as she waited for Gabriel’s hand to descend, loving the bite of pain before it bloomed into a ferocious heat that left her entire body trembling.

Somewhere around the eighth spank, Jessie let herself go limp. She loved that Gabriel was controlling the moment, and she was more than content to let him set the pace. She felt her eyes watering and before she knew it she was crying, releasing all the pent-up emotion of the last weeks, letting go of the fears and concerns that in this moment seemed inconsequential.

When Jessie finally came back to herself she realized Gabriel had stopped spanking her and was running both hands over her still flaming ass. She sniffed.

“You did beautifully, love. I’m very, very proud of you.”

Jessie flushed, thrilled to have earned Gabriel’s praise. She didn’t quite understand how someone could be good at taking a spanking, but if it made him happy that was good enough for her.

Gabriel gently turned her over, pulling her to straddle his lap. He ran his thumbs under her eyes, wiping away the last of her tears, then tangled his hands in her hair, holding her head immobile.

“I’m going to take your mouth now. Liam.” Gabriel’s attention shifted briefly to the other man, still standing behind Jessie. “Why don’t you check and see if our darling liked her spanking?” 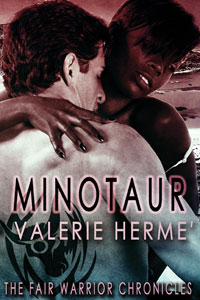