Vampire-hawks and wolf-shifters have two things in common—hatred for each other and dwindling populations. Both species are headed toward extinction. One vampire has the secret to survival—if he can get the lycans to cooperate. But when vampire Aidan Longshadow walks into the Wolf Den looking for the alpha, he's barely through the door before he’s attacked.

Hunter Black, a lycan enforcer, comes to his aid and questions him. Aidan offers to trade information about the murder of Hunter’s mate for lycan blood. At first, Hunter thinks it's a trap, but Aidan convinces him that the answer to both species' survival may lie in their blood. Hunter agrees to secretly help Aidan in exchange for the killer’s name, but he gets more than he bargained for when he finds himself falling for the seductive vampire. When the research goes awry, he’s sure he’s been used by the scheming bloodsuckers. But is Aidan the real enemy, or is it someone closer to home?

Heat Rating: Scorching
Word Count: 35,395
12 Ratings (4.6)
Paranormal Shape-shifter Alternative (M/M, Gay)
In Bookshelf
In Cart
In Wish List
Available formats
ePub
Mobi
PDF
HTML
Cover Art by Harris Channing
Reviews
Gale Stanley did a wonderful job setting up this series in book 1, Hunter and the Hawk. I fell for Hunter and Aiden right away. The men were different, but a strong bond was still formed. This series was a new spin on lycans and vampires.
Olivia Black
Read more...

Hunter turned back to his game. He centered his chin over the cue stick and concentrated on his aim. The game-winning ball sat just in front of his face waiting to be dropped into the pocket. He studied it, imagining where the cue ball would need to hit in order to make his shot. Holding his stick level, he took a few warm-up strokes.

Perfect. This wager is as good as won—

Disgusted, he threw down his cue stick and made his way across the room to the dance floor. As he got closer, the hackles rose on the back of his neck. Only midnight and a fight brewing already. Damn it, why couldn’t they take their argument outside. Why ruin the night for everybody?

As Hunter pushed his way through the crowd, the air seemed supercharged with tension. He shoved a few jeering men out of his way and saw that Nicky was at the center of the hostility. Apparently someone in the crowd had their hands on Nicky, and Doug wasn’t happy.

In Hunter’s opinion, allowing the omegas to be used for sex was asking for trouble. The men got all hot and bothered, and Rafe’s free liquor just added fuel to the fire. More and more, Hunter was discovering that he didn’t agree with their pack leader’s methods, but he gave Rafe the respect he deserved as alpha and kept his mouth shut.

Hunter stood at the sidelines and took in the scene. Doug could be a real pain in the ass. He was funny, intelligent and a damn good enforcer. Unfortunately, he had a big mouth—and a big hard-on for Nicky. Doug was a big guy, but the other wolf, Toby, a ginger giant, towered over him. The wolf-shifter had a mass of curly red hair and a temper to match. He and Doug prowled around the boy, like two feral beasts. Nicky looked terrified.

Doug’s upper lip rose, baring his teeth, and he let out a low, warning growl. The menacing rumble didn’t faze Toby in the least. Suddenly, Toby gripped Nicky from behind. He rubbed his cheek along Nicky’s bare shoulder then nipped at the boy’s flesh. Nicky jerked, and a thin whimper escaped from his mouth.

Toby’s muscular body tensed. Veins bulged on his thick neck, and one throbbed at his temple. “Fuck you.”

Nicky tried to wriggle from Toby’s hold, but the ginger wolf’s grip hardened, his thick fingers digging deep. He’d leave bruises. They would heal quickly, but that didn’t make it right.

Doug let out a growl and crouched, ready to attack.

Two fucking arrogant shifters who thought they could take whatever they wanted. Hunter snorted in disgust. “Let him go, Toby.” Hunter’s voice was calmer than he felt.

“Nicky wants to come with me,” Doug broke in.

“He’s an omega. It’s not his decision to make.” Toby growled.

A cold chill traveled up Hunter’s spine. “The boy still has the right to say yes or no to a partner. There’s not going to be any rape on my watch.” Hunter looked at Nicky. “Toby or Doug? Or do you want to call it a night and go home?”

Nicky bit his lip, obviously afraid to open his mouth.

The boy said something, but it was so low, Hunter couldn’t make it out. “Speak up.”

Doug, a smug look on his face, stretched out a hand to Nicky, who grabbed it and let Doug pull him into his arms. A love match? For the first time Hunter realized that Nicky had real feelings for Doug. This could be trouble in the future. He brushed the thoughts aside. He had enough trouble to deal with in the present.

Toby turned to Hunter and snarled. “You’ll be sorry for interfering, Hunter.”

Hunter used his eyes as weapons. He locked his gaze on Toby’s and fixed him with a menacing stare. Then he spat at Toby’s feet and turned away. Breathing a sigh of relief at narrowly avoiding a brawl, he headed to the bar for a drink. He never drank when he was on duty, but tonight he needed one. Rafe’s decisions were making it harder to control the men, not easier. A jealous lycan’s behavior became more unpredictable with each swallow of alcohol. Unexpected lapses of judgment, ignorance, and spontaneous eruptions of anger kept Hunter on his toes every time he took a shift. Avoiding the need to get physical was becoming harder. And he was a guy who did everything possible to stay out of having to fight. Not that he couldn’t handle himself. He could. Hunter’s fighting ability hadn’t developed from necessity. His childhood hadn’t been filled with bullying or beatings from bigoted humans. The strength and the right moves simply came naturally to him. Luckily, he had a high tolerance for the stupidity and arrogance of his fellow lycans, and he rarely had to use them.

But tempers seemed to flare more easily these days, and Hunter wondered how long it would be before he’d have to start using his fists to keep control of these situations. A talk with the alpha was in order, sooner rather than later.

Aidan hissed. “How do you expect me to sleep when I can smell you next to me?”

Hunter made a move to get up. “Then I’ll leave.”

“The hell you will.” Aidan grabbed his arm and yanked him back.

Hunter laughed and pulled him close. “You’re surprisingly strong for a sick man.” He gripped Aidan’s stiff cock. “And randy as a wolf.”

Aidan’s eyes glittered in the dark. He put a hand over Hunter’s, forcing him to squeeze the vampire’s erection. “I want your ass, Hunter. Not your hand.”

Hunter froze. He knew this was coming, but he wasn’t sure he was ready. He pulled his hand away. “I…I don’t think we’re up to it.”

“Speak for yourself, lycan.” Aidan brushed his lips against Hunter’s, muffling any more protests with his mouth and mumbling, “I need more. I think you do, too.”

Hunter found it hard to argue the point with Aidan rubbing his cock against Hunter’s hip. The vampire humped him mercilessly, and Hunter felt just as hard and needy.

Hunter nodded and whispered back, “Yes…”

Aidan sighed with relief as he explored Hunter’s body, touching everywhere he could reach. Instinctively, their hips started grinding together. Their eyes locked. He loved the way Aidan looked at him, so needy, so full of desire. He realized he needed the vampire as much as Aidan needed him, and Hunter knew he was ready to go down this path, with this man.

It was almost as if Aidan could read his mind. The vampire seemed to know Hunter wanted more—yearned for more. He pushed Hunter’s legs back until his feet were flat on the mattress, and Hunter felt a long, wet tongue exploring the sensitive area between his ass and scrotum. Aidan took the heavy sac into his mouth and rolled each ball on his tongue.

Suddenly, that tongue was lapping at his backdoor, and Hunter let out a growl. Aidan stopped and waited.

Aidan chuckled, and his heavenly tongue circled Hunter’s hole, then slid inside. The feeling was incredible, but Hunter needed more, and he didn’t mind begging for it.

“I need to get you ready, lover,” Aidan told him. Licking his lips, the vampire fisted Hunter’s cock and covered his fingers with pre-cum.

Hunter closed his eyes as Aidan’s finger penetrated his body. He welcomed the intrusion now, but a tingle of apprehension stiffened his spine. The vampire’s dick was a hell of a lot bigger than his finger. Would that huge thing fit inside him? While he considered it, Aidan withdrew his finger and entered him again, with two digits this time. Hunter tried to relax as Aidan scissored his fingers inside the tight sheath of muscle. After a few minutes, Aidan added a third finger, and Hunter let out a little gasp.

“Breathe, Hunter. It will feel better soon.” The vampire tried to distract him with soothing caresses and soft words. “I need to stretch you. It’ll make it easier later.” Aidan ran his other hand over Hunter’s chest and pinched his sensitive nipples.

Aidan’s fingers found that sweet spot deep inside Hunter, and the wolf arched involuntary. “Oh, fuck!” I want more of that. A lot more. Suddenly he found himself thinking Aidan’s cock wouldn’t be too big after all.

Hunter whimpered again when Aidan withdrew his fingers. He grabbed for the vampire’s hand, wanting to regain the connection.

Aidan bent over him for a kiss, smiling at his frustration. “You have no idea how much I’ve wanted to see that look of desire in your eyes.” He greased his shaft with pre-cum before guiding it to the wolf’s hole.

Hunter reached out to run his fingers through the long, black hair shadowing the vampire’s face. So silky—

Hunter’s teeth clenched with the pain, as the broad head of Aidan’s cock penetrated him. His muscles contracted around the invader, trying to stop it from going any further.

He did relax, and the burn eased. Aidan pulled back, and then pushed inside, a little deeper this time. Every thrust earned him a little more ground.

Aidan murmured words of encouragement, kissing him between each one and swallowing Hunter’s moans and whimpers. At last Aidan’s burning length was buried deep inside him. Hunter shuddered under the vampire, trying to control his breathing.

“So. Fucking. Tight.” Each word came out of Aidan with an effort. “God, feels amazing.” He started to move, slowly at first, then a little faster. The head of his cock rubbed that sweet spot inside Hunter and the wolf inside him howled.

Aidan kept at it, targeting the gland over and over. All pain forgotten, Hunter writhed at the assault, pushing back to meet Aidan’s thrusts.

The words seemed to release Aidan, and he increased his rhythm. Each forceful thrust took Hunter higher. His breath turned ragged. So close… 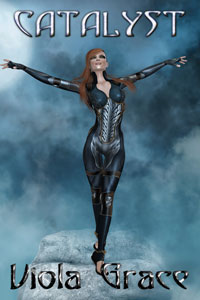 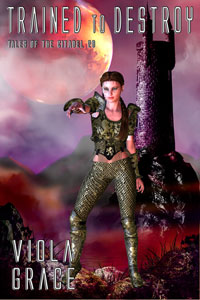