More From Love Beyond Sight

The door to the office area opened. “William Summers?” a woman called, and he raised his hand. “This way, please.”

Another door opened and someone else was called, which seemed a bit strange if there was only one job and one CEO to meet. It would definitely become a competition between him and them. It was that or he would have to go somewhere else farther from his apartment.

Taking a deep breath, William stood. He had to put on his best smile and posture. He followed the woman closely. As far as he knew, no one had ever met the owner of this company, so it would be a privilege to work for the man. Moreover, they recruited people and only the ones inside knew what this company was all about. In William's case, he'd seen an advert at the entrance of the building and had come back the next day to apply for a job.

When they reached the eighth floor, she opened another door for him. “This way. The CEO will meet you in a minute. Please take a seat in front of his desk.”

He nodded and stepped inside. Meeting the man in person? His heart pounded in his chest and he had no idea how to calm himself. Gulping, he sat on the lonely chair as that woman had told him. At least the office looked simple. Just a wooden desk with a lamp, a laptop and some papers, a bookshelf to the right, a door to the left, and a wide window in front of him.

Just in case, he checked his watch. It was exactly nine thirty in the morning. The watch ticked to thirty-one and the door opened. Was it just coincidence or when the woman said the CEO would arrive in one minute was planned? He was so nervous that he couldn't even think rationally anymore.

Someone walked in and closed the door. William didn't want to turn around and have a possible fright, so he waited, even if it would look unprofessional. He heard loud clacking footsteps approach the desk, until a man in a black suit walked around it and sat on the desk chair with a quiet thud.

William tried not to stare. He'd thought the loud footsteps were from a heavy person, but this kind of heavy was different. The man in front of him was tall and strong. His hair was brown, short, and combed to the side for a professional look. His eyes were a strong green that could draw anyone's attention. And the man was handsome to say the least. Again, he'd expected that it would be an old man.

“Are you done staring?” the man asked with a discreet smile.

Clearing his throat, William looked away. “I apologize.”

“There's no need for that,” the man said. “Now, you can relax because you have been chosen for this job.”

William did stare this time, wide-eyed. “Already? But I haven't even said my name.”

The other man chuckled briefly. “You can still introduce yourself, if you want,” he said. “I had your previous boss fire you so you could make your way to this company. Let's just call it headhunting. Starting today, you'll be working for me, and you'll be working from nine-thirty in the morning until five-thirty in the evening. You'll have a lunch break of a generous couple of hours. It's a tough job, so it's all right.”

“I understand. I'll introduce myself, then.” William paused, trying to not think too much about this man making his other boss fire him on purpose. He'd found it strange at the time when he was fired for no reason. “My name is William Maxwell Summers. I'm twenty-four years old, and I live two blocks away from here, close to the train station.”

“And I'm Lucian, the tenth generation of the ruling family of demons,” he said, earning a gasp from William. “There's no need to be so surprised.”

Like hell there wasn't. William clenched his hands on his lap. The man had sounded too serious and too crazy. “On second thought, I'll pass on this job offer,” he said quietly, standing from his chair. He made his way to the door.

Suddenly, he felt Lucian looking at his back. Just that strange feeling was able to stop William. He turned around. “Mr. Lucian, what kind of job do you need me to do?”

Lucian shrugged. “I just need you to be my new advocate.” He stood and walked slowly toward William. “A high number of demons have been turning everyone against me and my family. They want the ruling family of demons to stop ruling the world, so they want to…kick me out of the throne before I even get there.” A brief frown formed above his eyes as he looked down at William, too close for comfort.

Lucian woke up with his mate nestled in his arms. He couldn't help but smile, and pecked William's cheek.

He jolted when William pressed his body against his. His mate had a hard-on. “Shall we do something about that?”

William slid under the covers. “I don't mind doing it,” he said shyly, still half asleep.

Lucian swallowed dryly when he felt William's fingers sliding behind his waistband, his hands warm and gentle. His sleepwear pants were pulled until they were completely off. His eyes turned to William's hand coming out from underneath the sheets and dropping the pants on the floor. Just that made him rock hard.

“Don't move too much,” William said. “I'm not that experienced with sucking someone.”

He gripped the pillow under his head when he felt William's soft lips press against the head of his cock, and then his shaft was pointed up by an eager hand wrapped around it. “Will,” he moaned out as soon as he realized that his cock had gotten hotter, and moist from his mate's breathing enveloped him.

From under the covers, William's head bobbed and his ass perked up. Lucian wanted to fuck his mate so badly. “Spread yourself for me, Will.” He was pleased when William did as he instructed.

Soon after, William climbed onto Lucian's lap. “I can't wait any longer,” William said quietly. He reached behind him, wrapped his hand around Lucian's cock, and sat on it. His body lowered slowly with a prolonged sigh coming from his beautiful mouth.

Lucian slid back and sat up with his back on the headboard. For William to have some support, he bent his legs behind him. Taking the hint, William rested his hands on Lucian's knees, and began to move his body up and down.

Lucian held back from releasing when those words came out of William's sweet lips. It seemed that his mate was more honest in the morning. “Me, too.” He tilted his head and nuzzled William's neck, something that he loved to do so he could take in his mate's scent. It was a mixture of his own scent with the natural man smell that emanated from William's supple, sweat-coated skin.

“Fuck me, Lucian,” William begged. His dark eyes were half closed and gazing straight into Lucian's.

He couldn't take it easy anymore. Lucian pushed William forward and laid him on the bed, pounding into his entrance, William's curved hips burying into the mattress every time he thrust forward. What was going to be just a blow job turned into full-blown mating.

William moaned and thrust his hips to meet with Lucian's. Just like the other times, he moved his arms above his head. He just loved it when his mate did that. It was like a sign that he was doing something right.

Lucian fucked his lover in different speeds, searching for the man's prostate. He grinned when William suddenly groaned and arched against him. Lucian attacked William's prostate with his cock. As seconds passed, William's entrance clenched around him.

“So tight,” Lucian said faintly. He leaned down and pressed a deep kiss to William's lips. Their tongues caressed each other while he pounded his cock into his mate. With his hands, he played with the man's pink, hard nipples.

William moved his head away and gripped the bedspread close to his hands. He hadn't changed their positions to stop Lucian's shaft from reaching his prostate, so he was already at his limit.

Lucian gazed at William's expression changing, his mouth falling open and his whole head and neck turning a faint shade of red. His body stilled under him while Lucian still fucked his mate's entrance. 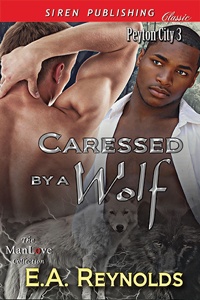