You Can Go Home Again

Becky Atlee had many good reasons for moving to New York. Just because she hadn't felt like sharing them with her on-again, off-again boyfriend, Tucker Rhodes, was no reason for him to act so infuriatingly dominant, was it?

Tucker can't understand why anyone would want to live in a dirty, dangerous, polluted city. But what he does understand is that Becky is running away from her problems, and she has more than she even knows about. When Becky's brother dies, though, she has no choice but to return home for the funeral. Can Tucker get her to see what's really going on in her life? And what will it take for him to get through to her? 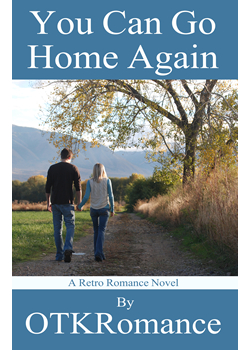 You Can Go Home Again

To her dismay, Becky felt her cheeks warm at the mild rebuke, and the memories of what similar displays of language had resulted in for her over the years. Annoyed with her reaction almost as much as she was by Tucker’s characteristic high-handedness, Becky made a low, growling sound in her throat and stamped her foot. “Look here, Tucker, I am not going home with you! I am not going to the funeral. I am not going anywhere….”
“Apparently, I wasn’t clear enough earlier when I said that I was ‘asking’ you to come home – I’m not really asking, you see. Because asking implies that you have a choice here, and really there is none. You will come with me, Red. Make no mistake about it. How you come is up to you, but I am not returning to Pennsylvania without you in tow.”
Becky glared at him. “You can’t make me do anything I don’t want to do. You… we… you’re not my fiancé anymore, in case you haven’t noticed! You don’t have any say in what I do or where I go…”
The grin he sent her way had a dark, dangerous glint to it. “You were the one who ended the engagement,” Tucker reminded her. “I never wanted that. I still want you. And so you see how I can think that I still do have something of a say in what you do and where you go, at least, in this one instance.” He glanced at his wristwatch. “Now, we have exactly four hours before our plane leaves. Considering drive time and check in time at the airport, that leaves you exactly twenty minutes to get your little behind back into your bedroom to pack for your trip.”
“I’m not going anywhere with you,” Becky insisted stubbornly, arms folded decisively over her chest.
Now Tucker’s grin widened. “All right, now, so we’re going to play this game, are we?” Out of the corner of her eye, Becky saw him unbutton one sleeve of his flannel shirt. He flipped it up, inside out, and began to fold it up several more times until it rested just beneath the level of his elbow. “I’m going to count to three, Red. And if you haven’t hightailed it out of this room by then, by God, your butt is mine.”
“What a surprise,” she scoffed. She glanced at the kitchen clock. “And imagine, it only took you twenty-five minutes before throwing a spanking threat my way.”
His eyes glimmered. “I wouldn’t have to resort to it at all, if you’d just act like an adult every once in a while and be reasonable.” He watched her, as she glowered back at him, standing her ground. “So what’s it going to be, sugar? You going to come along nicely with me to Pennsylvania, or do I blister your backside first and let you squirm on it the whole ride home?”
In a tone meant to grate on his control, she carefully enunciated her response through gritted teeth, as though speaking to someone either very dense or of another country who spoke only a little English. “I’m-not-go-ing-any-where-with-you!”
A deep, masculine chuckle shook through Tucker’s chest, and despite herself Becky felt her toes curl in response to that sound. She remembered times when they had made love, tousling and playfully wrestling in the sheets, when that laugh of his had started in his belly but felt like it ended inside of her because their lips had been locked at the time. She felt color rise to her cheeks at the memory.