Heat Rating: Sextreme
Word Count: 21,323
3 Ratings (4.3)
Contemporary Menage a Trois/Quatre Paranormal Vampires/Werewolves
In Bookshelf
In Cart
In Wish List
Available formats
HTML
ePub
PDF
Mobi
Cover Art by Harris Channing
Reviews
I was so excited to finally get to read more about Abby, Taylor, and Mitch. They have such great chemistry together. Add in vampires, fairies, leprechauns, witches and other paranormal creatures and wow what a story. The build up to what Abby might have and doesn't know is killing me and what of the stone? I love when an author keeps me on my toes. I hope to read more about them and what everything is leading up to!
amybowens
I enjoyed the story. It was a good read.
Karlyn Plett
Read more...

Abby's Twin Bands of Gold (MFM)
Darlette Clarke
In Shelf
$3.50
All Books In Cart
All Books In Bookshelf
Excerpt

Six months had passed since Abby Morgan moved back to the small Southern town of Midnight Creek located within Midnight County. Living there as a young child, she remembered very little about her life, before her parents up and moved her to the big city. It was her grandmother’s sudden death that had brought about her return in the first place, a grandmother whom she had been estranged from for most of her formative years for reasons that were unknown to her at the time.

A whirlwind of things had taken place between the moment she’d taken a ride from the bus station to Midnight Creek in the truck of ruggedly handsome Mitch Beaumont upon the insistence of her travelling companion at the time who turned out to be his quick-tongued grandmother, Helen. Mitch had an identical twin brother named Taylor. After meeting him that’s when things really started to heat up and become utterly unconventional and complicated. After discovering that the brothers were werewolves, it turned out that Midnight Creek was full of secrets along with the entire county. Nothing was as it appeared, and coming there had changed her life irrevocably forever.

“It’s late.” Feeling Mitch’s strong hands on her shoulders, Abby fell back into him until her back braced his firm chest. “I woke and notice you had managed to slip out of bed without disturbing me or Taylor.”

It was late, nearing one in the morning. Sitting at the island in the kitchen, she paused for a moment to take a sip of ice water she’d poured less than five minutes before Mitch entered the kitchen. “I had that dream again,” Abby admitted.

“The one with that bloodsucking bastard, Heath?”

“That’s the one,” she confirmed. “It’s always the same. I’m in the cemetery. I feel like I’m suffocating. I can’t catch my breath and that’s when I wake up.” She felt her chest tighten as she spoke about it, reliving the terror. Heath was a vampire who had been some sort of companion to her late grandmother, but after he’d tried to befriend Abby, it was obvious he had other motives on his mind like trying to persuade her to hand over a jeweled amulet that possessed a hell of a lot of power which had fallen into her hands through no doing of her own. Now it was her responsibility to guard the blasted thing to keep it from getting into the wrong hands.

“I don’t know why I’m still dreaming about him. He’s been gone for months and I know this, but somehow he’s buried deep inside my subconscious.” She wasn’t entirely telling Mitch the truth. When it had all taken place, she’d thought that she was going to die. She would have preferred if the brothers had killed Health, but instead, after what could only be described as a royal beating, he’d managed to get away along with some female vampire whom he’d coerced into helping him kidnap her. Knowing that Heath was still out there in the world left her unsettled. He would come back at some point, she was sure of that.

“You need to forget about him. He’s gone,” Mitch said. “We took care of him.”

“What if he comes back?” There, she’d said it out loud. A small sense of relief crept over her as she waited for an answer.

“If he has the nerve to show his face around here again, he won’t get away the second time. I promise you that.”

“You sound so sure of yourself.”

“It’s because I am. I speak nothing but the truth. I won’t let him harm you again and neither will Taylor. Come to bed. You need to rest. It’s far too early or late whichever way you want to look at it to be up.”

Abby slipped back into bed next to a still sleeping Taylor. She settled down as Mitch got in the bed on the other side of her. Between the two brothers she felt safe and secure like nothing evil in the world could ever harm her. She felt Mitch’s hand slide across her midsection as his fingers grazed her bellybutton moving lower.

The hot water from the showerhead felt good as it cascaded down over Abby’s naked body, but not as good as Mitch’s and Taylor’s hands as they touched her all over causing her to press into them as they sandwiched her, Mitch at her front and Taylor hard against her behind. She pushed back against Taylor and felt his firm cock slide between the slick cheeks of her ass. She sucked in a deep breath and let out a stifled moan as Mitch kissed her deep and hard.

“Dirty girl,” Taylor said, his breath brushing the back of her neck ever so slightly. She felt his hands on her hips as he held her close to him as he started grinding against her, his shaft grazing her now twitching pussy and asshole.

Mitch had already found her clit. Instantly, she tightened her pussy as his fingers manipulated her making her feel weak in the knees. “Time to get you clean,” Mitch said with a sexy wicked look in his eyes. With his free hand, Abby watched him take the body wash from the niche in the shower. He opened it and squeezed out a generous amount over her breasts. When the cool gel slid over her hard nipples, she writhed in pleasure. “Dirty girl gets clean,” he said, half grinning.

Both men massaged just about every inch of her body paying extra special attention to her breasts and pussy. At one point she was on the verge of orgasm, but managed to maintain control, and when Mitch turned the water off, she was relieved but anxious to know what they were going to do to her next.

Both of the guys toweled her off after their shower, and now lying on the bed, Abby watched as Mitch took position between her spread thighs. Taylor stood off to the side watching them.

Feeling Mitch’s tongue enter between her slick folds, Abby tossed her head back into the pillows and moaned. “Oh my,” she said. “You do that so well. Eat my pussy, Mitch. You know just how to please me.” It still felt strange for her being so open and talking dirty, but again it was freaking liberating to be able to do so. Never before in her life before Midnight Creek had her sex life been like this. Being watched by Taylor made her feel extra naughty, but she also wanted him now and beckoned for him to come to her and join in.

Taylor nestled in at her side and fondled her breasts before taking her left nipple into his mouth. He bit down on it slightly and she jumped a little bucking her pussy against Mitch’s probing tongue. Her breath came quick now as she felt an orgasm coming on making her tingle from her head right on down to her toes.

“You like that?” Taylor asked, tweaking a nipple between his thumb and forefinger.

“Getting bossy,” Mitch said, looking up from between her legs. “I think you need to be taught a lesson.”

“Straddle him,” Mitch said, taking full control of the scene. Abby looked from one brother to the other and did as she was told. A slight shiver ran through her as Mitch spoke. With his voice low and demanding, she figured it was best to do what he’d said. Taylor had already applied a condom and feeling his cock throbbing against her wet pussy, she reached around and edged him inside her. “Bend forward,” Mitch directed. “Fuck him and spread your ass cheeks wide.”

“Yes,” she replied. Taylor was about halfway inside her now. They were going to fuck her pussy and ass at the same time. She was sure of it! One of Mitch’s large hands landed against the cheek of her ass and then the other, spanking her. “Ouch,” she cried out. Truthfully it wasn’t that painful, it stung more than anything. She felt her pussy contract around Taylor’s cock, and then Mitch slapped the cheeks of her ass again. She wiggled her ass a little. “I can tell you love that.” Mitch’s hand landed on her ass again with a smack.

“Aren’t you going to fuck my ass?” Abby asked, looking back over her left shoulder. The dirty girl inside of her had really come to surface this time.

“Of course I am,” Mitch confirmed. He unwrapped a condom and slid it in place. In his other hand he held a bottle of lube. “Spread those rosy cheeks, darlin’.”

Full was the one word that described how she felt with two cocks pumping her deep. Concentrating and trying not to think about the pain that surged through her ass wasn’t easy. Again it was a fine line between pleasure and pain. “Oh, God,” she said. She took a deep breath and pushed back against Mitch’s cock. Holding still for a moment, she bit down on her bottom lip. “Both of you stop for a moment.”

“Are you okay?” Taylor asked. Fine beads of sweat had formed on his brow. The room was hot and filled with the scent of their sex. Air conditioning would have been great. Abby made a quick mental note to look into installing it.

“I’m good. I just need a moment to get my bearings.” It wasn’t like she wanted to stop. She straightened up and with her hands now planted on her own hips and her back slightly arched, she nodded. “Fuck me until I come.” 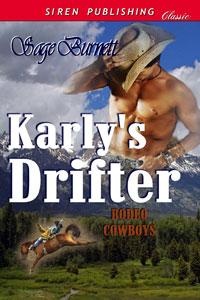