Mia was stuck in a rut, until one night she went to the movies and everything kind of blew up.

Mia Haven’s life takes a bizarre turn when a gorgeous action hero leaps out of the movie screen and saves her life. It’s not until Mia gets sucked into the action movie, along with Special Ops Lt. Aiden Smith, that she realizes her hero isn’t crazy.

Mia doesn’t mind the alternate reality. After all, she’s getting hot sex and she has morphed into an awesome triage doctor. Aiden even asks her to marry him, but since it’s just a movie, that just isn’t going to happen, right?

The movie is about over, and Mia’s greatest fear is not being with Aiden when she disappears from the screen. She’d rather die in the final awesome special effects battle. 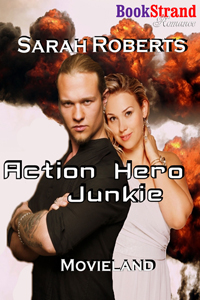 "Mia has always loved action packed movies and their heroes. But, she never expects what happens when she has her life saved by Special Ops Lt. Aiden Smith. The fact the gorgeous man seems to jump out of the movie screen to save her seems crazy, but it appears to be exactly what has happened. So now the rut she was stuck in of work and home and not much else, seems to have turned into an action movie with a hero of her own. When she is transported into the movie things seem to get even weirder. But, in the movie she is a respected doctor, having the best sex of her life and in love with an alpha hero. What will happen when she is forced to choose between the two realities? And will they all survive the epic battle at the end of the movie? Action Hero Junkie is an interesting take on time/inter-dimensional travel. I found the story to be action packed (no pun intended) and interesting. Though I personally found the outcome was a bit “out there”, it was a fantasy story so anything is possible. I am interested in reading other action novels by Sarah Roberts. If you are a fan of the action packed movies, and their heroes, you will most likely relate to Mia and will enjoy Action Hero Junkie." -- Tanya, Joyfully Reviewed

The sound was deafening. Wind whipped Mia’s hair around her face, the ends lashing her cheeks. Explosions rocked the ground under her feet, and she staggered. Aiden steadied her, his hand locking around her upper arm. She could feel the shock impact of his gun conveyed through his body as he fired. “Run!” he bellowed.

Terror stuck her tongue to the roof of her mouth.This is where I came in the first time. No time to think. A burst of gunfire rat-a-tat-tatted too freaking close. Mia ducked, her heart trip-hammering, and ran. Aiden pulled her faster. She needed no encouragement. She flew over the ground. Four minute mile? Easy! Her laboring lungs felt like they were going to burst.

Blurred blades were suddenly ratcheting overhead. Aiden gave a massive heave, boosting her upward. Other hands reached out, snagging her shoulders and arms, hauling her up. Mia felt herself screaming, but she couldn’t hear herself over the awful noise. She sprawled on a hard metal surface, the impact squashing air out of her lungs. Mia sucked for breath. A metal door slammed shut. “Clear!”

Then she was pressed down, the huge hand of gravity on her back. The noise of battle dropped away, and there was just the whump-whump-whump.

Mia was dazed. I’m on a helicopter.A damn helicopter! The pieces of her scattered mind started coming back together. What the freaking hell!

She felt someone take hold of her, lifting her, and she lashed out with her fist.

She stared up wildly. It was Aiden. He was the one holding her. But she didn’t want him to. I want to go back! I want to go home! She burst into noisy tears.

He pressed her face against his shoulder. His familiar scent—musky sweat and gunpowder—surrounded her. Strangely, she was comforted. He raised his voice, leaning close to her ear, so she could hear him above the noise. “It’s okay! It’s going to be okay!”

Mia reared straight up, almost clocking Aiden in the chin with the back of her head. He made an umph sound, but she didn’t pay attention. She was mad, really, really mad. “Shaken up? You nimwit! I’ve been shot at! Things are blowing up all over! I’m hauled into a helicopter like a sack of potatoes! And I’m just shaken up a bit?” Mia slapped the side of his head.

She was glaring, but Aiden didn’t seem to care. He was grinning at her. Mia heard several weary chuckles. She whipped her head around. That was when she saw there were more men dressed like Aiden, with camouflaged faces, and they were all grinning at her. Even the ones who looked drawn and were sporting bloody bandages.

Mia shut up, but she shot Aiden a really dirty look.

At Mia’s dagger-glance, Aiden grinned. It relieved him that Mia seemed to have recovered somewhat from her fright. The helicopter came down almost on top of us—like they were looking for us! He couldn’t have planned it better, except for the firestorm that the appearance of the helicopter had generated. That had been a little hairy. He couldn’t believe how quickly Mia had reacted. Her instincts had been right on target. She had taken off running straight for the ’copter.

When he had tossed Mia into the helicopter, she had been shaking, practically hysterical. She was obviously terrified at finding herself suddenly in the middle of a running gun battle, and rightly so. Aiden’s own heart had been bounding with fear—fear for her. Fear, that she would be hit—he shuddered—or worse.

Those terrible minutes, until they were safe aboard the helicopter, he had cursed himself, up one side and down the other, for getting her into danger. He shouldn’t have let her stay with him. He had known how hazardous it could turn out to be. He should have insisted she go home. But I didn’t want her to leave me, selfish bastard that I am!

Now here she was, wrenched out of her familiar life and thrust into circumstances that had to be frightening to her. Yet she seemed to be handling it all right now.

Aiden tightened his arm around her. She didn’t pull away but nestled closer against his side. He rested his chin on top of her head. The soft, tangled strands of her hair caressed his jaw. He drew in his breath, and he could smell her wonderfully distinctive scent. He smiled to himself and closed his eyes. Almost, he could persuade himself that they were back in her small apartment, shut off from the dangerous world in their own private intimate cocoon.

The familiar, clamoring din of the helicopter beat at his ears.

Fighting for a Mate (MM)
Marcy Jacks
In Shelf
$4.99
Tweets by
sirenbookstrand