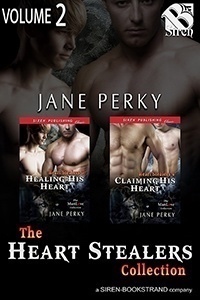 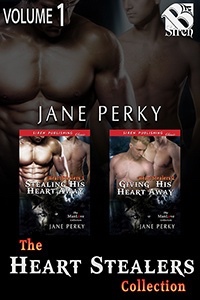 “Stop it,” he found himself whispering, looking away. “One guy already broke my heart. I can’t take this. I’ve been a sucker my entire life. I should’ve known when I confessed to Todd Matthews in high school that he’d never been interested in me, that I was just the butt of all his jokes with his jock friends. Todd was just the beginning.”

Stefan knew he made no sense to Roman. Hell, Roman might have harbored no ill intentions against him. Maybe the guy merely took pity on him and offered to buy him a drink out of simple kindness. Good people still existed in the world, right?

God. What would Roman think of him now?

Roman reached out, closing one huge hand over his clenched one on the bar. Then the shifter rose, and he thought that would be it. Roman would walk away, except Roman leaned in close and without warning, tipped his chin and took his mouth.

Boy, he’d never been kissed like that, didn’t think a simple kiss could feel like tiny fireworks exploding inside of him. Roman claimed his mouth hungrily, roughly, and without apology. He parted his lips slightly, letting Roman deepen the kiss. Recovering from his initial shock, he clutched at Roman’s shirt and sucked down on Roman’s tongue.

His dick pulsed in his jeans, and he became aware of Roman’s hard muscles pressing against his skin. When Roman pulled away, he panted, unsure of what to say. He still wasn't sure if Sherman had gotten lost or if there was a plausible explanation for Sherman not showing up but right now, all he could think about was Roman.

“There. You still think I’m just another scammer?” Roman asked, his exotic eyes bright gold under the dim bar lights.

He shook his head quickly, still incapable of words.

“Those poor fuckers don’t know what they’re missing out on,” Roman said, taking out his wallet and slapping a twenty on the bar, not taking his eyes off Stefan. It was a little intense, having Roman’s undivided attention, and admittedly, a little hot. “Let’s go.”

Challenge blazed in the shifter’s eyes.

“Anywhere but here. That good with you?”

“A-absolutely.” He’d never done anything like this in his life, anything wild or reckless. Stefan did everything by the book. Growing up, he got good grades at school because he had nothing to do during school nights, no social engagements to go to, and most of his friends preferred to stay home and play MMORPGs.

They exited the bar.

“I left my ride back at the city, you mind taking the train?” Roman asked him.

“We can take my car,” he suggested. They arrived at the parking lot and he led Roman to his car. Roman held his hand out.

Roman flashed him that scary stare again but he refused to back down. Roman sighed, shrugged, and got in the passenger seat. Back at the wheel, he started the engine and asked, “What kind of shifter are you, anyway?”

“Go ahead and take a guess.”

“Um, bear?” he asked. Roman definitely had a dominant predatory beast inside of him.

He thought back to Roman’s feral yellow gaze in the bar. “Wolf?”

He huffed. “You should give me a break. I’m not used to shifters. Okay, I used to work with a few, but they were a deer and tabby cat shifter, respectively.”

“That explains your initial reaction to me earlier. You looked ready to bolt after seeing me.”

“Well, you growled at me. How was I supposed to react?”

“You got a point. I don’t usually like humans.”

“I can tell, but why?” he pressed, hungry to know more about this enigmatic and gorgeous werewolf. Another question came up, too. What made Stefan different? Stefan didn’t dare ask though, because it felt like he was in some kind of dream. This wasn’t real, because hot guys like Roman didn’t normally ask out suckers like him.

Roman shook his head. Stefan felt like he brought up a sensitive topic and decided to leave for now. “I can’t tell you the reason yet, but let’s just say a few bad humans decided to screw me up during my time in the military.”

“Okay. Wait, you’re a soldier?” he asked, interest piqued even more. Of course Roman did something badass, and the werewolf was certainly in shape.

The werewolf sounded grumpy again. Another sensitive topic? How many were there? Then again, who was he to judge, when Stefan carried plenty of baggage himself?

They started moving now, and he drove out of the multi-leveled parking lot. Sherman’s betrayal no longer felt as important as before, not with the huge werewolf sitting next to him. In a span of an hour, Roman had treated him to a drink, listened to all his problems, and was now going on a date with him. Could he call this a date?

It was certainly progress, plenty compared to the two years of his life wasted on a scammer who only saw him as a cash cow.

“What are you thinking about, little human?” Roman asked.

Roman chuckled, the sound sexy and deep, capable of melting his insides. “Blunt. I like that.”

He quickly shook his head and thought he needed to elaborate. “I mean, I’m wondering why Sherman made me work for every ounce of attention but you’re the exact opposite.”

“There’s one thing you should know about wolves then,” Roman began, and he thought Roman changed the topic for a reason.

“What’s that?” he asked, deciding to play along.

“Once we set our sights on something we want, we don’t stop the hunt until we’ve obtained it.”

“I’m sorry, I talked a lot, didn’t I?” he asked, setting the cup in front of Roman on the counter.

Roman brushed his huge callused fingers over his and his heart started racing again. His reaction to the werewolf was insane. Stefan couldn’t recall being this sensitive to any other guy, not that he had plenty of experiences to compare to. He read plenty of romances, it was his favorite genre, but he never expected those books to translate to real life.

Stefan didn’t know when it started, maybe just yesterday, but he started to fall really fast and hard for Roman. Maybe that was a little dangerous, and Roman might end up breaking his heart, but he didn’t think so. Roman told him he wasn’t going anywhere anytime soon, didn’t he?

“I don’t mind. The sound of your voice is calming,” Roman said, sipping his mug.

“How about you? Don’t you have work?”

“Hey, no secrets, okay?” he blurted, aware he still knew next to nothing about the werewolf.

“Fine. I do jobs for certain clients, jobs that are against the law.”

“That sounds shady as hell.” Of course his werewolf had to be badass and worked some kind of dangerous job. Stefan should have expected that. They were like day and night, chocolate and vanilla ice cream, worlds apart. Yet, despite their differences, he figured they could work things out.

Stefan was that determined to have his own happy ending.

“It’s the kind of job perfect for a man like me,” Roman said, setting his cup down, expression serious. “At least now, I don’t just blindly follow someone else’s orders. I’m not a good man by any means, Stefan. You should know that at least, before things become serious between us. This is new to me, too. I don’t usually do relationships.”

“You mentioned that last night.”

“You’re still not backing out?” Roman asked with a raise of his eyebrow.

He firmly shook his head. “Nope. I don’t scare that easy.”

Within a blink of the eye, Roman was no longer sitting across from him from the counter and stood next to his chair. He let out a surprised breath.

“Are you sure about that?” Roman asked, cupping his cheek.

He nodded. “I’m done with staying in the background and being passive. That’s how I was with Sherman and all the other guys who broke my heart. I want to take initiative.”

He stood, legs shaky, and planted his hands on Roman’s muscled chest. Then he tiptoed and kissed the big werewolf. Roman’s hands were on his ass a moment later, pressing him forward. Roman wrapped his hands around his waist, and without warning, turned him so he faced the counter. Roman kissed the side of his neck, hand moving to the hem of his jogging pants. He moaned when Roman found his dick.

The werewolf gave his thickening shaft a few pumps and tugs. Just from that, he nearly came, but he held back, not wanting to disappoint Roman.

“Look at you, you’re so hard for me right now. It’s turning me on,” Roman said against his ear, pressing his erection up against his butt.

“I—” He didn’t know what else to say, couldn’t come up with tangible sentences either, because Roman’s large hand felt so good on his dick.

Stefan didn’t argue, even as Roman peeled his jogging pants down. Now the bulge in Roman’s jeans dug against his bare buttocks. He groaned, thrusting his dick to meet Roman’s hand.

“Fuck,” Roman muttered against him. He heard a zipper being jerked down, then felt the press of Roman’s cockhead between his ass cheeks. Stefan’s bottoms pooled to his ankles and he kicked it aside, distinctly aware they were really doing this, in his kitchen no less, and in broad daylight.

He blushed, but didn’t tell the werewolf to stop. Neither of them were drunk now, and truthfully? Excitement and shame proved to be a potent combination.

“Don’t worry, I got lube right here,” Roman told behind him, a growl accompanying his voice.

Roman pushed one slick finger in him, making him squirm.

“God,” he murmured, wanting something bigger inside of him as Roman added a second finger.

Roman nipped at his neck in answer and began to widen Stefan for his access. The werewolf brushed against his sensitive spot, and he gasped Roman did again and finally replaced his hand with his dick.

“Do something for me,” Roman said against his ear, resting his hands on his waist.

“Touch yourself while I fuck you.”

Hunters of the Gods 3: Pride of a Princess (MFMM)
Dixie Lynn Dwyer
In Shelf
$0.99