It Takes a Thief (MF) 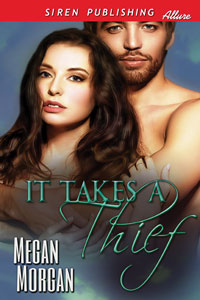 It Takes a Thief (MF)

“How did you find me? Did you follow me here?”

“I have my ways.” She drummed her fingertips against the leather of her purse.

“So you broke in here, and you’re all by yourself?”

“That’s not very smart, little girl.” His posture was stiff and coiled to spring, despite the bravado in his voice. “I could hurt you.”

He furrowed his brow. Then he glanced at the table next to the bed, which had a drawer in it. She had no doubt there was a gun in that drawer.

“You seem like a rather fashionable, modern gentleman.” She unfolded her arms from around the purse. “I’m sure you could get a nice price for this bag.” She opened it.

“Oh, I could.” He sounded like he was trying to be threatening, but failed. “It’s Fendi. I know a guy. He specializes in stuff like that. I could probably get a good five hundred for it. He could sell it for more.”

She delved inside and pulled her wallet out. “So, how come you haven’t gotten it to your ‘guy’ yet?” She held up the wallet. “You could probably get a couple hundred for this, too.”

His eyes glittered. His face was much harder than at the café, even when he revealed his true self. And yet, he was still handsome, sexy even. A dangerous man, at least by his standards. The idea was provocative, a ghost of what he’d stirred in her earlier.

She opened her wallet. “But, you haven’t even gone through it yet because you’re not very good at this. If you were a skilled thief, you would have taken this directly to your fence instead of bringing it home. Which means, either you’re feeling guilty, or you’re new at this. Or both.”

“I’m good at what I do lady, make no mistake about that.”

“Well then, whatever it is you do.” She pulled the bills out of their pocket—four hundreds, a fifty, a sheaf of twenties—and held them up. “It’s not this.”

He flicked his gaze to the money. A hint of desperation as his pupils dilated.

She stood, purse clutched in her other hand and held the money out to him. “You can have it. It’s all you really want.”

He stared at the money, then at her. The visible tension in his shoulders and neck told her he very much wanted to step forward and take it.

“It’s a long story.” She continued holding the money out.

He didn’t move to take it, though he did look at it again with that quiet longing.

She walked over to him swiftly and stuffed it down the front of his pants. He gasped, and his eyes popped wide. Up close, he was even more beguiling. His eyes were clear gray, his lashes delicate and long, golden like his trail. He smelled like the cologne that hung in the air.

She stepped back and shouldered her purse. Maybe she’d give it to Lexi since she liked it so much.

“I’m gonna go now. Whatever in your life has led you to these choices, I suggest you reconsider your options. Perhaps another career would be better for you, and safer.”

He touched the money bulge in the front of his jeans and gaped at her. It was too bad, really. She would have had such fun discovering what kind of lover he was. She still believed him to be thorough and skilled, unlike his thievery.

She stepped around him to the window. He turned and stared dumbly at her, arms dangling at his sides. Then he gasped as she slung one leg out the window. She touched the ledge with her foot and was about to slip out. Maybe, in a few days, he’d think he dreamed it all.

“What are you doing?” His voice rose. “You’ll kill yourself. You can’t go out like that!”

“Don’t worry about me. I got this.” She ducked out the window.

She wasn’t fast enough. He reached out and gripped her wrist.

As he did, a terrible sensation swept through her, one she knew all too well. A whisper unlike any other spoke directly and powerfully to the very core of her being.

In that instant, all the thrill of flirtation, anything he’d awakened in her, and even the hope of settling back into her nice, comfortable boredom was painfully and irrevocably dashed.

She gazed transfixed at his long fingers wrapped around her wrist, at his shiny, neat nails with their hint of golden glow. She sagged on the windowsill.

“Oh no,” the words barely escaped her lips. I’m going to have to kill you now.

A few tense, silent miles from the bar, Eamon whipped the car into the empty parking lot of a closed store. He brought it to a swift halt next to the building and turned the engine off.

“What are you doing?” Adrenaline vibrated through her limbs. She had defended herself on multiple occasions, had beat up people, had killed of course, but none of it gave her the feeling she had now, the triumph and satisfaction, nor the utter certainty that for the first time, maybe ever, she had done exactly the right thing.

Because, for the first time, she hadn’t been defending herself, but her soul mate.

“I just need a minute.” Eamon lifted his hands above the steering wheel. They shook. “Jesus Christ, my life just flashed in front of my eyes. I gotta say, it wasn’t that great.” He let out a hysterical laugh.

She grappled with her seat belt and unfastened it. She couldn’t get her head on straight, couldn’t find common sense because it was buried too deep by her swelling righteousness. This was a disaster, it was dangerous, it was wrong. This was the end for her.

And yet, she rushed toward it with open arms.

Her seat belt snapped back against the door with a crack. She stretched over the console between them and crushed her lips to his.

He drew in a sharp breath, and she caught it as he exhaled, and pushed her tongue against his, widened his lips so she could drink him in. Everything about him filled her senses, awakened them and made them expand and throb. She gripped the front of his shirt and pressed her fist over his hammering heart.

He slipped an arm around her waist and dragged her the rest of the way over the console. He had so much strength in that deceptively lean frame, tight muscles that strained beneath his skin, belying his power. That strength and the rest of his essence crawled over her and sought to be absorbed, to become one with her.

She clambered into his lap and straddled him. The steering wheel pushed into her back until he reached down and popped a lever on the side of the seat and the back reclined. One of her sandals slipped off and fell, forgotten, on the floorboard.

The ferocity of their kissing made her lips hurt, but she wanted that pain. She yanked his shirt up over his chest. Her hips settled into the crook of his like puzzle pieces fitting together, united at last. If she could stop this from happening now, she didn’t know how and didn’t have the will to do so even if she could figure it out.

He drew heaving breaths as she pulled away to catch her own. “You—you saved my life.” His chest hitched beneath her hands. “You—they were going to—”

She smothered his words with another kiss. He grabbed her waist, then moved his hands down and yanked the bottom of her dress up. He wanted this, too, wanted to be made whole, whether he understood that concept yet or not.

He broke the kiss slightly. “Why?” he gasped against her lips.

She drew back again, to look at him in the dim light from the street. He stood out vivid against the darkness, bright and clear in her vision. Every sharp line of his finely hewn face, the golden glow in his eyes, the saliva glistening on his swollen lips.

“Don’t ask right now.” She smoothed a hand down his body, over his firm, flat stomach, over the sleek curve of one narrow hip. “It’s better if you don’t know.”

She popped the button on his jeans and delved her hand inside. Silken hair curled against her fingers. She knew his body despite never having seen it before yesterday. She knew every inch of it, as intimately as she knew her own. The specifications of his body, every one of his bodies, had been written in her mind long before she was born. This man, this perfectly imperfect man sprawled beneath her, with his chest hitching and his long, slender throat working convulsively as he struggled for words, was her destiny. A chivalrous and gallant man despite his faults and his shortcomings, despite his thieving and gambling and lying. He was glorious in his rough, lowly stature, majestic with his slick, flirty smile and his sinister intentions. A beautiful criminal. A fantastic loser.

“Audra.” He put his hands on her and all over her body: her ass, her hips, her bare thighs. “Tell me who you are. Please.”

She yanked the zipper down and then gripped the waistband of his pants. He lifted his hips without protest, and she dragged his jeans and underwear down.

“Shut up,” she told him. “Stop asking questions.”

He pushed his hands under her dress. They were compelled to touch each other, commanded by something beyond themselves to make this happen. He tugged the crotch of her panties to the side and stroked the ridge of his knuckles up her slit. She was already wet with the need to be filled. She never got aroused this fast, never wanted it so badly, but she brimmed with the desire to be fucked now, a desire that bordered on desperation. The newly awakened hunger was a demon clawing at her skin from the inside. It would be sated, or it would rip her apart.

He drew a shaky breath. “Oh, fuck. You really want this, huh?” That was a much better question for him to ask.

His cock was hard, ready for her as she was for him. She wrapped her fingers around it in response. He was thick, hot, slick. The screaming in her head—a sound of both demand and warning—grew so loud it blocked out everything else. She had to have him inside her, connected, made complete.

In the Beginning (MF)
Flora McGregor
In Shelf
$2.99