Heat Rating: Sextreme
Word Count: 28,706
17 Ratings (4.5)
Contemporary Western/Cowboys Alternative (M/M, Gay)
In Bookshelf
In Cart
In Wish List
Available formats
HTML
Mobi
ePub
PDF
Cover Art by Harris Channing
Reviews
Tragedy, revenge, lust brought these two together. Garrett and Jack, omg they were steamy sexy hot.
Together, they can heal each other, and find the love and a future as one.
loved this love this series
Amazing 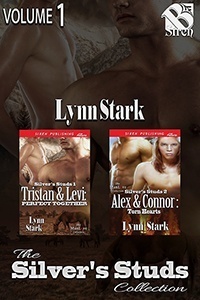 The soft swooshing sound of the door opening and closing woke Jack. Nurses had been coming and going every couple of hours, checking his vitals, asking him how he was feeling. Now that he had decided to go home, he was surprised at how much better he felt. He had even been able to go to sleep without trouble.

He didn’t need to see the face of the tall man silhouetted for a moment against the light from the hall to know who it was. Jack’s breath caught, and his heart began to beat a little faster.

“What are you doing here?” he asked, unable to keep the note of anger out of his voice.

Garrett Marsden moved closer to the bed. “I’m sorry. I didn’t mean to wake you.”

Jack didn’t believe him. The guy was out for revenge. He had fucked Jack, ordered him around, and even brought the sheriff up to the bedroom, knowing that Jack would be naked and waiting for him. He sure as hell wasn’t going to worry about whether he woke Jack or not.

“I’m sorry about your mom. I really am,” Jack told Garrett, his voice filled with the passion of his regret. “But there’s nothing I can do to bring her back, so leave me alone.”

Jack turned away and onto his uninjured side as he spoke, letting Garrett know he had nothing more to say on that or any other subject. He was relieved that he had been able to convince his parents to go home, rather than stay there with him. He didn’t want them to wonder who Garrett was and why he was there, although as a doctor that would probably be simple enough to explain.

The sudden need to puke had Jack sitting up and reaching for the basin on the bedside table. As he emptied the contents of his stomach the wound in his side felt as if it was being ripped open. He groaned and spit the last of the foul-smelling liquid from his mouth. A large hand was on his shoulder. Garrett’s other hand took the basin from him and out of sight.

“I’ll be right back,” Garrett told him gently, the heat of his hand imprinted on Jack’s skin, even after he left Jack sitting there.

Jack wiped his mouth on the back of his hand, trying to catch his breath. He heard the toilet flush and water running in the sink. Seconds later Garrett returned with a wet washcloth. Jack took it with a shaky hand and wiped his mouth. Garrett poured water into a cup from the pitcher on the table. He waited until Jack was ready to rinse his mouth out. He did so, still not looking at the other man.

Falling weakly back against the pillows, Jack closed his eyes. This had to be a bad dream. It couldn’t possibly be anything else. One bad decision led to another. He couldn’t escape the memories of the past, however. Years of trying to do just that had proved that it was impossible. He had promised his parents that he would stay, and he knew he couldn’t break their hearts again.

“Could you just go, Doctor?” Although he knew the man’s name now, he wanted to keep it as impersonal between them as possible. “I’m really tired.”

There wasn’t an immediate response. Jack held his breath. Garrett finally answered. “Okay. Get some rest. We’ll talk another time about what happened.”

That was something that was never going to happen. Jack’s new life was beginning the moment Garrett Marsden walked out the door.

As soon as the door closed behind the doctor, Jack got out of bed. He found clean clothes in the drawer and chuckled. He could smell his mother’s favorite laundry detergent and knew she was responsible. He dressed quickly, shoving his wallet, keys, and cell phone, into his pockets. He jammed his feet into his boots and laced them quickly, ignoring the pain in his side.

Walking to the door, Jack opened it and looked up and down the hallway. The nurses’ station was about thirty feet away. He didn’t really want to cause trouble for the nurses, but he wasn’t going to argue with anyone about whether he should leave or not. When the only nurse at the station turned away, Jack hurried down the hall, in the opposite direction, where he knew the elevators were located. He would have gone down the stairs, but didn’t know if there was any kind of alarm connected to them.

Jack got outside without encountering anyone other than people coming in to visit patients. He nodded and smiled at a few people that he knew, but didn’t stop to speak to anyone. Once out on the street, he figured he better call his dad for a ride. Heading toward downtown Silver, he pulled his phone out and made the call that would finally get him home.

Jack had managed to get through a five-year stint in prison without getting raped. His size and attitude might have had something to do with that. The same got him into enough trouble with other inmates, those wanting to put him in his place, wanting to be sure he wasn’t a threat to their own status within the ranks. It had been five years of survival of the fittest.

His gaze shifted again and went to the man’s groin. The size of the cock behind the denim was long, thick, and definitely in a state of arousal. He looked up from there and saw the glint of raw lust in the man’s dark eyes.

“Your choice. You have a debt. Are you willing to pay it?” The doctor’s voice was dark and rough.

It went through Jack, pulling at him, which was damn disturbing to him. The very fact that the man wanted to fuck him should have been enough to turn him off. Instead, he found that he was strangely attracted.

Jack would never know what made him make the choice he did. Maybe it was his physical weakness. He didn’t know or care. Nodding, he bent to unlace his boots. Once he pulled them off his feet, he stood to push his jeans and underwear to his ankles. He stepped out of them, wanting to get this over with. Sex didn’t mean much to him. It was just sex, a way to relieve an itch. Still, he had never bottomed, had never wanted to do so, and didn’t quite know what to expect. What he did know was that this doctor he had called to save him, was now turning his world upside down.

Carefully bending over the end of the dresser as he was ordered, Jack spread his legs and rested his head against the cool wood surface. With his ass in the air and completely vulnerable, he needed to think of something else. His heart was pounding madly in his chest. His blood was rushing through his veins. He was going to get a fucking dick shoved in his ass to pay a doctor’s bill. He didn’t have to be a genius to know that a visit by the cops would probably be next, if he didn’t settle his account. Because dealing with the law was something he wanted to avoid, he accepted his fate.

When lubed fingers speared between the cheeks of Jack’s ass and into his virgin asshole, his body jerked violently. His breath hissed between his clenched teeth. Pressing his eyes closed, he tried to relax. The pain was incredible, making the knife wound seem insignificant in comparison.

Neither of them spoke. Jack didn’t know what to expect. The pain eased as his muscles were worked expertly. There was no talking. The entire process was done with swift efficiency. He should have been grateful, but he was suddenly aware of being equally disinterested in the personal aspect of the act in the past. How many men had he placed in exactly the position he was in now? He couldn’t even remember the last time he saw a man’s face as he fucked him.

Now a large hand pressed between Jack’s shoulder blades as the head of the doctor’s cock began to press into him. Shuddering, Jack waited, hoping he could get through this. The way he looked at it, it wasn’t any worse than anything else he had ever experienced. He owed the doctor, and he was paying a debt. The thought helped get him beyond the reality of having a dick in his ass.

What Jack hadn’t been prepared for was his own dick getting hard. It began to fill with blood as the doctor’s huge hunk of flesh pushed relentlessly into his cavity. Jack didn’t know how or why he was getting hard, when the fucking experience was so uncomfortable. He felt as if he were being split in half. There was some pain, but it was obviously turning into something his body, if not his mind, was enjoying. His dick was pushed into the end of the dresser when the doctor shoved in the last few inches, finally buried.

An unmanly whimper escaped him when he felt his balls tighten. The head of his dick was rubbing against the dresser. A hand reached between his spread legs and grabbed his balls, squeezing and pulling them. His asshole clenched, and his breath stuttered as he inhaled sharply.

He wasn’t supposed to be enjoying this, Jack told himself severely. He was paying a debt. Who the hell got excited about paying a bill?