Three Men and a Woman 13

For kicks, a guy wants to watch his girl get humped by another man. Who can he ask but one of his best friends?

What can go wrong?
Trace Fulton sees disaster barreling down the tracks like a runaway train. His two best buddies, Gunnar Einarsson and Luke Mahoney, are on the outs, and no surprise. Because, guess what? When the best friend is in love with the girl he’s humping, even the most clueless guy’s going to notice.
It’s a cat that can’t be put back in the bag.
Trace understands. He’s met Moxie Derbridge, and she’s a beauty. He has the solution. He sets up a little demonstration to let them all see what’s possible—which, it turns out, is freaking hot. But the four of them barely get a taste before Moxie disappears, sucked back into her unhappy past. The men unite to rescue her. Once she’s back in their arms, no one is letting go again.

Three Men and a Woman 13

More From Three Men and a Woman

Three Men and a Woman: Nanette (MFMM)
Rachel Billings
In Shelf
$4.50
All Books In Cart
All Books In Bookshelf
Excerpt

Somehow, Trace wasn’t surprised that there was someone waiting for him at his doorstep.

He was in a half-house, a good portion of a McMansion a couple had built up the side of Mount Ascension, a reasonable walk to both the capitol and St. Pete’s. When the couple’s four kids had grown up and gone off, they’d divided the space so they didn’t have to leave their home. The result was a really decent upstairs apartment.He’d left the ranch when the game was over. Sitting through the second half had felt fairly awkward—more awkward even than the first half had been, when Luke was all hang-dog not speaking, Gunn was failing at covering his glum with bluster, and Moxie was missing from the mix with no explanation except the obvious, unspoken one.

Then Luke had taken off with barely a word, and Gunn had gotten more and more morose. Trace was pretty sure that had to do with the fact that Moxie had failed to show up after Gunn had texted what Trace presumed to be a message to her that it was safe to come home.

By the time he left, Gunn had been sitting in stony near-silence.

Here was the runaway girl, sitting alone in the cold.

Looking pretty glum herself, if he was any judge.

He opened his arms and, in an entirely satisfactory way, she rose and stepped into them.

He was probably wrong to enjoy so much the feel of her in his arms. She was suffering, obviously, and already caught up with two guys.

Who were his best friends.

He stepped back before that goodness became obvious in the region of his fly and opened his door. “Come inside, darlin’.”

She did. And didn’t object, either, to the arm he kept around her shoulder.

He didn’t have his place entirely outfitted, but he had a nice couch across from his big 4K TV, a good bed in his room, and a decent one in the guest room.

With only a whimsical thought to those two bed options, he led her to the couch.

When they sat, he still had his arm around her shoulder and she tucked into him as if it was natural.

He liked the feel of that, too.

Trace stayed quiet. He figured she was a girl, and, eventually she’d talk, but she held out longer than he expected. And surprised him with her first words, too.

“Uh…you’re welcome here.” More than. But even he had to admit a set-up like that might escalate an already awkward situation. “But, maybe…you have a girlfriend?”

He was quiet a little longer, and she broke like a fever.

“I slept with Luke.”

Yep. Tell Uncle Trace all about it.

“He wanted to watch.”

What a dick move.

Maybe he said that last bit out loud, because she looked up at him, a little surprise in her eyes. Like the best girlfriend, he quickly figured out his role. “On Gunn’s part,” he clarified.

Her head was smooshed into his chest now, as though she could hide from what came next.

“It turns out I have feelings for Luke, too. And he for me.”

He’d seen that rushing down the pipeline, all right.

“But I love Gunn. I really love him.”

And, the thing of it was…he was happy. He was happy, there, with her tucked up against him. Happy with her sad little story about how she loved two men. His two buddies.

It really didn’t seem like a sad story at all.

Probably that was wrong, too.

Probably his dick shouldn’t be stirring. Especially not with the way her head was tucked against his chest with a perfect line of sight to ground zero.

Luckily, she looked up at him. “What should I do?”

“I don’t know, Mox. I guess…take some time to think about it?”

She made a poor attempt at a smile and set her head back down where he liked it, even if he had to instruct his dick to stand down.

He felt her sigh against his chest. “I don’t think I can talk to him.”

“Do you…maybe have a bag in your car? Some clothes and sh—stuff?”

She shook her head no. A long silence and then…”Maybe you could call him for me. Let him know where I am. Maybe…”

“Maybe he could pack a bag for you, and I could pick it up?”

“Would you do that?”

Sure he would. Because he was just that crazy. “Of course.

“I can go?” Moxie asked, like she was trying out the thought.

Trace nodded. “But before…I think we need to let you know what you have to say yes to. How it feels to be the woman who commands the love of three men.”

His hand under her robe had slipped lower, baring her shoulder. She shook her head. “Trace,” she said. Then she looked at Gunn and said his name in question.

Gunn took a breath, knowing what she was asking. He looked over at Luke and then glanced at Trace. He decided he didn’t have to say yes to all of it right then, but he definitely wanted to say yes to this. He ran his fingers along the opening of her robe, stopping where his thumb could strum over her nipple. “Whatever you want, babe. As much or as little.”

“It’s okay if you want them, too.” He guessed it was, anyway.

She shook her head. “This can’t be right.”

“Does it feel right?” In a small part of his heart, Gunn wished she’d say no. That she’d wrap her robe around herself and let him tuck her into his coat and take her out to the truck. Take her home.

But he could see Trace had his hand on her. Probably, it was under the hem of her robe and finding its way up her thigh.

At least, that was what Gunn’s hand wanted to be doing.

When she said his name again, it was a whimper.

He touched her cheek and leaned in to kiss her. “I love you, babe. Whatever you want is all right.”

She had an arm up over his shoulder, and she clutched him hard. But she didn’t resist when Trace took over the kiss.

Or when Luke came up beside them and did the same thing.

He smiled. He knew that sound. It was what she said at those moments he pushed her boundaries. When she wanted something but didn’t think she should.

When she thought she should say no, but she wasn’t going to.

One of her arms left him now. She circled it around Luke. That opened her up—Gunn and Luke at either side, Trace in front of her. It left her helpless, undefended, as six male hands took advantage.

Her robe was open now—Trace’s doing. Gunn watched as Trace took hold of both her nipples. He tugged and held on, pulling steadily until she tore her mouth from Luke’s to look at him.

Even then, he didn’t let go, and Gunn’s body shuddered at the sight of it. Trace’s gaze challenged hers, his grip on her nipples lifting her tits. Moxie’s breath came out in a moan.

“Luke,” Trace instructed. “Put your fingers in her cunt and tell me she’s wet.”

Gunn watched Moxie’s face rather than Luke’s hand, but he knew when she was breached. Her eyelids fluttered and her head dropped back—her surrender to sensation that he recognized and loved.

Luke worked her more and she moaned again. Gunn could hear the sound of it now, and so Luke’s words were unnecessary.

Still, Trace kept up that tension on her nipples, and Gunn could see it was driving Mox wild.

Yeah. Oh. He loved it when she said that. Like she meant to object but couldn’t, because she wanted it so much.

He curled up all his fingers except the middle one. Up under the silk of her robe, he found her opening and pushed in.

They had all her favorite parts. She groaned in pleasure and leaned back, bracing herself against Luke’s and his shoulders.

They had her stoked. Luke made a change in the way he worked her that was obvious in the catch of her breath, in the moans she let loose.

Trace had his head bent, sucking at her neck, even as he continued to squeeze her nipples. “How many fingers you using, Gunn?” he asked after he’d left a bruise.

Gunn wasn’t saying no. He shoved another finger in even as Trace started jerking rhythmically on those tits. He could hear the sound of Luke rubbing over her clit now—hard and fast—and, in another moment, Moxie was panting in pleasure.

She did it. In spasms that had her crying out. Had her legs collapsing so she fell into the support of Luke’s arm. Had her shuddering and wailing, on and on because they kept working her. Gunn’s fingers in her ass and Luke’s at her clit. Trace working those nipples so hard.

She twisted her fingers into his hair and held on, her body rocking into each bit of stimulation. With a hoarse, exhausted whimper, she finally eased down. Her head lolled against Luke’s shoulder, and Trace’s gaze went from her to Gunn.

“I guess she knows how to come.”

Gunn huffed out a laugh. “Yeah.”

“She know how to suck cock?” 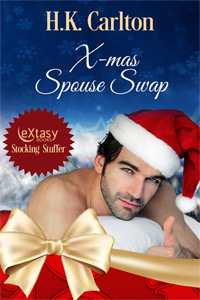