STOLEN: When Cody and Bec find Jason injured, without a place to stay or a way to support himself, they invite him into their lives and discover there is more to the man than even he knows. Can love and respect grow amid tragedy, fear, and unusual behavior?

SOLDIER: Jenna is a soldier, but the people she trusted have been lying to her. Then they tried to kill her. When Zane and Rick are tasked to protect Jenna, can they convince a woman who has never known love that they want more than just a little fun?
TRAITOR: Could the mind-blowing sex and incredible threesomes be clouding her judgment? Suddenly on the run from both the good guys and the bad, can Sandra, Davin, and Darrick uncover the truth and somehow learn to trust each other?

Bec felt the familiar rush of adrenaline spread through her veins. God, she’d missed this. Glancing over at her partner, she could feel his similar excitement tinged with a little nervousness. She understood his unease. They hadn’t even been medically cleared for active duty and here they were charging in to rescue a child abducted after her mother had been viciously gunned down. The fact the child was their boss’s niece should change nothing. They were well trained, well prepared, and more than capable of pulling off what should amount to nothing more exciting than a taxi service. Somehow, telling herself that didn’t mean she believed it. This assignment was more important than anything they’d done before.

Her focus narrowed as they approached the rendezvous point, ready for anything, hoping for the easy outcome but expecting the worst. It was full dark by the time they rolled to a stop on the quiet country lane. She’d switched off the lights more than a mile back and had donned her night vision goggles to be able to maneuver the vehicle without hitting a tree. It was dark, and it was very, very quiet.

Speaking telepathically, Cody checked the time with her. “We’re right on time. He should be here,” he said. She could sense he had his teeth clenched tightly.

“Give him a moment,” she sent, sounding calmer than she actually felt. “It can’t be easy negotiating bush land like this at night with a small infant.” Her own words heightened her anxiety. How would Jason, a doctor, not a field agent, manage to keep the baby quiet and get himself through dense bush land in the dark?

After making sure the interior light was switched to the off position, Bec eased the door open slightly and carefully lowered one foot to the dirt road. Straining to hear any unusual sounds over the night insects, she thought she heard movement off to her left. She froze in place, once again trying to hear any sounds that didn’t belong.

A small noise alerted her to Jason’s presence at the same moment her empathic senses picked up on his distress. He was hurt, and he was bleeding, dragging his badly damaged ankle behind him. Without conscious thought she moved from the car and toward the injured man, sighing with relief when she saw him through her night goggles moving toward them. Her gun was in her hand before she really thought about it, her years in the field coming back to her as if the last year had never happened.

She reached Jason just as he stumbled again, jolting the infant in his arms. A small cry rang out over the area as the baby girl woke with a start. Speaking telepathically, she called his name as she approached, reassuring him she’d been sent by Sandra and her boss. She went to take the infant from his arms, but it was clear he wouldn’t relinquish the precious bundle until he knew for sure they were safe.

She helped him instead, guiding him over the rough ground, grateful the baby had only made that single noise. She heard Cody start the car and throw the back door open for them as they approached. She guided Jason into the backseat, quickly following him in and closing the door, still trying to be quiet.

“Stay down,” Cody told them telepathically, obviously aware of a danger Bec had missed while she helped Jason. He moved the car forward quietly as Bec struggled to get a seat belt around Jason and his precious cargo.

“Hold on,” Cody ordered silently. “We’re about to have company.”

Jason sat a moment on the sofa, stunned at the strange turn of events and again unsure of his place in all of this. His cock strained against his jeans, his body very clearly telling him where he wanted to be.

“Come on, Jase,” Bec called to him telepathically. “Don’t overthink it. Please just be with me and forget everything else for a while.”

Jason grabbed his crutches, levering himself up and moving toward Bec’s bedroom. As he entered the room he watched from the doorway as Cody kissed her, then lifted her dress over her head as he walked her backward. Her knees hit the mattress, and with a soft smile she fell onto the bed. Cody looked over at him, probably sensing his disquiet as Bec levered herself up onto one elbow and held her hand out in invitation.

Something unraveled in Jason’s chest. A need to be included, a need to be part of something special, and he found himself moving toward her, awkwardly removing his clothes as he neared the bed. He sat beside her as she helped him to pull his T-shirt over his head then lowered her hands to remove his jeans. She moved off the bed to get the denim over his cast and then pushed him onto his back as she straddled his hips and kissed him like the world was about to end. On and on she kissed him as she writhed against his hard cock, straining to get closer.

Cody’s hands smoothed over her shoulders, pushing the bra he’d undone over her arms, releasing her plump breasts. Jason groaned as they brushed against his chest, his cock straining against the cotton of his boxer shorts. She crawled higher up his body, clasping their hands together and stretching his arms over his head, her breasts swinging near his face until he latched on to one, sucking it into his mouth and worrying the nipple with his teeth. She cried out at the same time he felt Cody lift her slightly so he could remove her underwear. Then he pressed a condom into Jason’s hand.

Still greedily sucking her breast, Jason managed to rip open the little packet and sheath himself with the condom. Bec quickly fit her body to his and impaled herself on his cock. He released her nipple, groaning his ecstasy as the walls of her pussy rippled around his engorged flesh, the sensation more intense, more amazing than he’d ever known.

She collapsed onto his body, her head tucked under his chin. They breathed heavily for a few moments, and then Bec’s breath hitched as he felt Cody lift her off him and roll her under his body.

Cody kissed her hungrily. Jason could feel his intense need to claim the woman who had become the center of both their worlds. Bec kissed him fiercely, maybe sensing his need also. Cody pushed straight into her, then held still for a moment. Bec moaned as he lifted her knees over his arms, pushing his cock deeper into her dripping pussy.

Jason rolled onto his side, his hand gently caressing the breast nearest to him. He lowered his head to take the stiff nub into his mouth as Bec writhed against them both, desire tightening her muscles. Cody pulled back, pounding into her harder and harder as Jason found her clit and pressed it rhythmically, smiling when Bec let out a loud groan as her climax drew nearer. 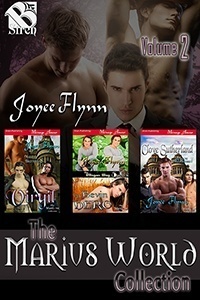