Abby had just dropped her parents at the airport and was driving back home when she heard her phone ring. Was it possible that her mother was calling her already or—her heart did flip-flops just the way it did every time her phone had rung since last weekend—was it one of them? Seth had said they would call her with instructions, but so far she hadn’t heard one word from them and it was Friday afternoon. She had been tempted to call, but something told her that would have not pleased them.

She pulled over into the parking lot of a restaurant and grabbed her phone from her purse. It wasn’t her mother. It was an unknown number. She answered it.

“Abigail, this is Seth.”

“Seth.” She breathed out his name.

“Yes. I’m so glad you called. I was beginning to wonder…”

“I told you one of us would call. You have to trust me that I will do as I say.” There was a slight hint of disapproval in his voice.

“What is your e-mail address? I have a link to send you. I want you to print out your train ticket. You’re to be on the Acela to New York this evening at six o’clock. Bring a few changes of clothes. You will wear a dress, heels, and your black garter belt with stockings that Rod can’t seem to get out of his head. You can wear panties and a bra because you’re traveling.”

She heard his intake of breath, but before she could say anything, he continued.

“A car will be waiting for you at Penn Station near where the taxis pick up. The chauffer will have a sign with your name on it. When you are in the back seat, you will remove your panties and your bra and stuff them into your purse. Do you understand?”

“I understand. But I can wear my dress, right?”

“Of course. I don’t want you to give the chauffer a heart attack.” She heard him laugh.

“Where will the chauffer take me?”

“You’ll just have to wait and see.”

“You’re not going to tell me?”

“Trust is what this weekend is all about, Abigail. You and your weekend are in our hands in every way. We will control your every move and thought. Are you ready for that?”

“Good. Now I’m going to end this call if you don’t have any questions.”

She drove back to her house, her mind going wild with excitement. She couldn’t explain it, but the not knowing what to expect was not only driving her crazy, it was making her want them even more. She couldn’t wait to get on the computer and download her tickets.

She went to the link in the e-mail and printed them. She studied the piece of paper as if somewhere between here and there was the key to everything she had ever thought she wanted.

She had time for a short nap. She figured she might need it. But first she called Jessica and told her the good news. Jessica was happy for her.

“So it’s the whole weekend again. He must have really have been missing you. How do you feel?”

“Happy and nervous all at the same time.”

“Well, when you get back I want to hear all about it. And by the way, my mom said she was going to talk to her friend about getting you an interview. I’ll let you know what happens.”

“That’s so nice of her. I can’t thank you both enough.”

“No problem. I’ll talk to you later. And if you need anything, call me. I could come get you if you need me to. New York City isn’t that far away.”

For a moment, Abby was stunned. She had never thought about that. What if things didn’t work out the way she hoped? What if they weren’t who she thought they were?

“Okay. But be careful. You only just met this guy.”

She tried to take a nap, but she couldn’t stop her mind from spinning off into a dozen different scenarios of what the weekend had in store for her. Finally realizing there was no way she could sleep, she decided to take a bath. She filled the tub with warm water and sprinkled it with lavender-scented bath salts. Her body immediately relaxed as she slid into the warm water.

Closing her eyes, she imagined how their hands felt on her body. She moaned softly. She couldn’t help but visualize their magnificent bodies and how well they had fit with hers. It was all she could do not to make herself come. She had never felt this kind of all-consuming sexual anticipation before. It was making her a little crazed.

Fingers lightly caressed her feet, running up her legs to caress her inner thighs. She moaned softly, biting her lip to stop herself. She was supposed to be quiet. Rod said nothing. She sighed silently with relief.

She felt her labia parted as another man’s fingers moved across her stomach and up to her breasts, lifting them upward to knead them expertly. She loved their touch. Over and over they teased her clit and her hard nubs. She felt her legs being lifted as a finger was inserted into her anus. Not one word was spoken between them. Her body was on fire with a hunger that only one thing could stop. She tried desperately not to move. It was difficult since they were invading every intimate part of her with no other objective than to make her need them. She wanted to scream for one of them to put her out of misery by fucking her. Instead she groaned loudly, biting her lip to try and stifle it.

When she felt hot breath on her pussy, she turned her head and tried to stifle another moan. Her legs were spread wider. Her ass was lifted. A tongue flicked her clit and pushed inside her. An unwanted moan escaped between her parted lips.

“Open your mouth.” Rod barked out his order.

She parted her lips further.

“Use your teeth to grab the ball.”

He was really going to gag her. She wasn’t sure she would like this, but she did as he instructed. Her head was lifted and the gag tied behind her head.

“Just breathe through your nose. If you want us to stop at any time, your hands are free, just flex them and we will stop.”

Hands continued their assault on her body along with tongues that were kissing and licking every inch of her, even her ass. She wanted more. So much more. This was becoming torturous. She needed release desperately. But they obviously weren’t ready to let her come.

One hand pulled her right nipple to affix a clamp with what felt like tiny teeth. The same was done to her left nipple. It was tight and painful, but it was arousing. Her pussy gushed with pleasure. A warm mouth suckled one nub and then the other before the clamps were tightened slightly. She groaned but it was muffled by the gag.

Suddenly her body was lifted from the bed and her feet were placed on the carpet. She stood with someone’s help. He smelled good, kind of spicy and woodsy. She liked feeling helpless. She liked everything about what they were doing to her.

“My brother is on the bed,” Rod said in her ear. “His cock is ready for you. I will help lift you and slide it inside your pussy. He will lie back on the bed. Your ass will be exposed for my other brother. He will fuck your ass.”

His words were all she needed to come, but she somehow stopped herself, knowing it was not what he wanted. She nodded.

“And then,” he whispered, his lips caressing her neck before he continued, “I will lift your head by your ponytail and bring your mouth to my cock. You will suck it and I will fuck that beautiful mouth of yours until I come.”

How could she have thought she didn’t want this? Her body was in tune with everything they were doing to her and were going to do to her. She couldn’t wait to have their cocks buried deep inside her. Rod’s voice was hypnotic and made her want nothing more than to open herself to him and his brothers. She wasn’t sure there was anything she wouldn’t do if he asked.

She heard the familiar rip of foil. They were putting on their condoms. She wanted to tell them they didn’t need to, because she wanted to feel their cocks naked inside her, but she had been silenced.

Rod lifted her and until she felt the head of his brother’s cock at the entrance of her pussy. She moaned as the man pushed his cock upward, filling her. As Rod had told her, the man leaned back into the bed and brought her with him. Her hands went to his shoulders. Her knees were on either side of hips. She instinctively lifted her ass while still gripping the man’s cock with her pussy. Two fingers lubricated her anus. She shivered with anticipation moaning into her gag.

The man beneath her reached down and found her clit. He pulled on it as he worked his cock in and out of her. It felt so good. She began to ride the hard, thick cock that now fucked her. She wanted to see him. Damn, she hated this blindfold, but there was no doubt that it intensified her other senses. She heard the man beneath her groan. She smiled, knowing she was bringing him to orgasm.

“Now, it’s time to have your ass fucked too, baby.” Rod’s voice was in her ear again as he reached down and squeezed her breasts roughly, tugging on the clamps before he released them. Delicious pain from the blood flowing back into her nubs made her cry out into the gag.

“Beautiful,” Rod said as he pulled them outward so the man who was fucking her pussy could suck her sore nubs. She gasped from the exquisite but torturous feelings that flooded her senses.

The man behind her pushed the head of his cock into the opening of her anus. She stilled slightly as his cock penetrated her and pushed slowly inside her. There was a little discomfort, but it didn’t last long. She pushed back. The man beneath her released her nipples and leaned forward. She assumed he was resting on his elbows as his angle changed slightly. Both cocks began to move inside her, finding their rhythm.

They fucked her together. Each stroke increased the pleasure of the other. She hated the ball gag and wanted it removed so they could hear her cries of pleasure.

As if reading her mind, the ball gag was removed. She breathed deeply, taking air into her lungs. While her mouth was still open, she felt one hand on her cheek moving her head while the other gripped her ponytail. Rod’s cock filled her mouth. She suckled it eagerly. She craved his taste. He began to fuck her mouth in earnest, his cock plunging deeper into her throat. His hand tugged on her ponytail to force her to take more. He forced her to take him completely. She couldn’t seem to get enough of him. She wanted his cum down her throat again.

With three cocks fucking her, her orgasm built swiftly. There was no stopping it. She had no control. All she could do was go with it as it swept through every inch of her body until she was nothing but a receptacle of pleasure. 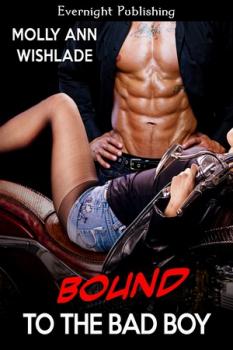 Bound to the Bad Boy
Molly Ann Wishlade
In Shelf
$4.99