Colton Landry was never as happy as he was astride a horse especially when he was able to put a kerchief up to hide his face and to ride along with the Old West Town owner’s gang, shooting up the town to add flavor to the experience for the tourists.

The shots were not live rounds, of course, but special ones their CEO Kendall Forrester had created for best realistic gunshot sounds during hold ups and the like, but still safe for all involved.

They were practicing a new bank robbery routine today so there were no tourists around, only owners or other town employees of the late 1800’s Western-themed park. Also in a couple of months was the annual sharpshooter’s contest. He’d won last year and the year before. Barely. Duke Stanton the local Enclave sheriff had given him a good run for his money both times. He’d been the reigning champion until Colton had come along and given him a run for his money.

For today’s riding and shooting, Colton had to gallop his horse down main street with three other desperados shooting his fake gun into the sky to make their presence known, stopping up short at the Sheriff’s office. This was their third run through, and while he enjoyed it, he was getting a little bored.

As they waited for the next part to unfold, Colton glanced around the area noting the candy-filled store front display of the old-time treat shop, Hunter Franklin’s woodworking shop across the street, and the very authentic Western saloon down the way, which also led directly into the recently built Old West hotel.

Colton saw movement out of the corner of his eye and turned to see who it was. A woman he’d never seen before cautiously looked at their group of horses and desperados, smiled in their direction, and then hurried across the town’s main thoroughfare and directly into the saloon.

Holy shit! Who is that? She’s gorgeous.

The color of her hair was honey gold with hints of red. He couldn’t see her eyes from here, but her million dollar smile was intriguing to say the least. She disappeared behind the swinging doors of Cooper Mackay’s saloon.

He swiveled around in his saddle so fast he almost unseated himself. How embarrassing would that have been? Very.

“I am paying attention.”

“Oh?” he asked, disbelief coating his tone. “Then what did I just say?”

Colton pushed his hat back on his head and grinned. “You said, ‘Colton! Pay attention.’ And I am. So what do you want?”

Kendall shook his head and stared up at the crystal clear blue big sky. “I want you to incorporate this routine into the lead up of the annual sharpshooter event.”

“See you were not paying attention at all, you were staring at someone you don’t need to be staring at.”

Colton shrugged. Staring at a beautiful woman he wanted to hunt down and try to find again was not a waste of time in his mind.

“Tell me her name, and then I’ll pay attention more.”

“Be that as it may, pay attention, and perhaps I’ll divulge the information you seek later.”

“Maybe I’ll just mosey on over to the saloon, tie up my horse there, and find out for myself.”

“Or you can simply tell me whether or not you can incorporate this routine into your annual sharpshooter’s gun show.”

“Oh? And after leaping off your horse will you still be able to shoot your gun and actually hit the target if the redhead is anywhere in the vicinity?”

He grinned. “I sure hope so. Besides her hair is sort of a strawberry blonde, not red, don’t you think?”

An expression of incredulousness came over Kendall’s face. “No. I don’t think. I have a wife. I rarely concern myself with the color of any other woman’s hair.”

Kendall looked like he was about to leap off of his horse and strangle him.

Colton pushed out a sigh and said, “Yes. Fine. I’ll be perfectly able to perform this routine, and then promptly leap off my horse and make a trick shot during the annual sharpshooter’s event. Satisfied?”

Kendall rolled his eyes, but the angry look faded.

Colton stared at him. “So tell me her name. You promised and I have witnesses.” The men around them started laughing.

“She works at the saloon with Cooper?” Interesting. Colton hadn’t heard of anyone new joining the saloon girls.

“No. She’s the new night manager at the Old West Town hotel.”

Colton promptly looked over his shoulder at the saloon doors again—ignoring everyone around him—and vowing he’d find out if she might be interested in a short-term affair with two men.

His best friend, Warrick liked strawberry blondes, didn’t he? Colton laughed to himself. If he didn’t before, he certainly would now. They didn’t always agree on everything, but their taste in women was often exactly on target.

“Something else you should keep in mind,” Kendall said with a stern element in his tone.

Colton looked away from the saloon doors and asked, “What’s that?”

“Isabelle is very good friends with Jessica Campbell-Dawson and not someone you and Warrick can simply fuck once and throw away.” Kendall’s eyebrows went north in admonishment.

His immediate answer to that simple question came audibly when of all the men on the horses surrounding him started laughing out loud again, many of them making snide remarks to the contrary under their breaths beneath their kerchiefs.

Kendall said sternly and concisely, “Colton, only seeing a woman one time for wicked carnal pleasures before moving on to the next woman is the very definition of fuck and throw away.”

Colton pushed out breath. “Got it.”

Keeping his focus on the group—and not the saloon doors behind him—Colton considered his and Warrick Harper’s wicked ways with women up to now. They did have a reputation for not seeing any woman for very long.

It wasn’t a secret.

Warrick joined them, laying down on his side, pressing his naked muscular chest to her back, sandwiching her against Colton.

Isabelle fairly vibrated with desire as each of them pressed into her. Colton was in front, and Warrick hugged up next to her back. It was much like the last time they’d all been together. Although this time, they were all gloriously naked, and she was fairly certain sex was about to take place. She couldn’t wait to tell them her secret.

Warrick brought both of her arms above her head, holding her hands down with one palm as he kissed the back of her neck, sending riotous tingles down her spine. His finger found its way between her thighs to delve into her pussy and gather fluid. He then moved his finger quickly between her ass cheeks, his stiff cock rested against her thigh at the ready.

Was he priming her for double penetration sex? Another shiver ran down her spine.

“There is something that I need to tell you,” Isabelle whispered.

“What’s that?” Warrick ran his wet finger around the edge of her rosette. “Is it that you’re a virgin here?” He pressed the opening with one finger. “I expected that.”

“Sort of a virgin,” she said quietly, unsure of her actions.

His finger suddenly paused at the entrance to her rear channel. “Sort of a virgin? Explain.”

“Preparing? What do you mean?”

He stilled against her back, asking the same question again, “What do you mean…exactly?”

“I’ve been using butt plugs in varying sizes over the past few weeks to prepare myself for our first time, should I ever get the chance.”

Warrick lifted up, releasing his hold on her hands. His expression unreadable. Was it surprise? Anger? She wasn’t sure.

“You’ve been preparing yourself? For us?”

She looked over her shoulder at him, twisting the waist, hoping she hadn’t ruined this already. “Yes. For you. For this.”

He pushed out a breath of what sounded like shock, but he didn’t look angry. He look stunned. Or maybe surprised.

He whispered, “Since when?”

“Since the night after Duke told me your best friend’s name was Colton Landry.” In other words, several weeks.

Warrick’s cock pulsed against her thigh, the large head pushing into her lower ass cheek, warm and stiff and delicious. His forehead dropped suddenly, landing on her shoulder.

Isabelle had a pang of regret. Had she done the wrong thing? Was she supposed to wait for them? “Are you upset with me?”

“He didn’t expect you’d be ready for double penetration on our first night together. If he’s like me, he’s trying to tamp down the sudden visceral lustful thoughts he’s having about fucking your ass tonight. I also suspect he’s trying not to come on the back of your leg right about now in delight.”

“Shut it, Colton. I have more control than that, and I can speak for myself.” His voice sounded a bit awestruck and Isabelle relaxed, feeling like she had done the right thing.

Warrick pushed the tip of his finger inside her ass, wiggling it around. The butt plugs she’d used hadn’t wiggled. He inserted another wet finger inside, and she sucked in breath of sudden arousal. His fingers felt much better than butt plugs. He thrust inside a little bit deeper and a wave of pleasure rode up her spine.

“That feels so good,” she said barely recognizing her own deep sexy voice.

“That may be true, but you still feel pretty tight to me.”

She shrugged. “You don’t have to do anything if you don’t want to, Warrick. I hope I didn’t ruin something it. Knowing what I do about this town, its occupants, and their unusual lifestyle, I did a bit of research to prepare myself. I didn’t want to miss out.”

Warrick’s cock pulsed against her ass cheek again. She giggled. “Your cock seems to be excited about it, if you don’t mind my saying.”

“Actually, my cock can’t believe I’m not already imbedded to the hilt in your ass.”

“I can’t believe that either,” she said, trying to sound wistful.

Colton chuckled. “Why don’t I lie back and let you impale me, honey. Then Warrick can get the lube and grease up your ass the right way. Then he can do exactly what he wants more than anything, but never expected was going to happen tonight.”

“He’s right.” Warrick kissed her quickly on the mouth before he left the bed. Colton retrieved a condom from the nightstand drawer and rolled it into place. He soon squeezed her in his arms, then he shifted her so that she was straddled over his hips. His fully erect cock pressed against her wet slit without entering her pussy. He took her face in his hands to kiss her exuberantly.

They kissed and kissed and kissed, all the while rubbing their naked warm bodies against each other. His hands then moved around her body to clutch her tight. His palms roamed up and down her spine, kneading the muscles along either side. She loved having his callused hands stroking her back. After several minutes, Isabelle forgot the position she was in until his cock reared up against her wet pussy all of a sudden.

Isabelle shifted her hips, moving over Colton so she could impale herself on his impressive cock.

“What are you doing, honey?” he asked in a tone that suggested he understood exactly what she was doing. 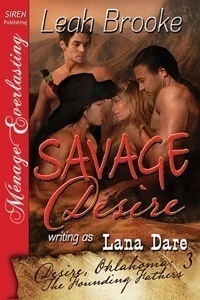