Eli, a fierce vampire warrior, had one mission, to protect a human named Genevieve. He has no idea why until the powers of the Seer, the vampire race’s all-powerful divine being, start to ravage her. In her human form, Genevieve is plagued by crippling headaches, and the stronger her powers grow, the weaker she gets.

Eli races to get her to the Generals, the leaders of the vampires, so Genevieve can be transformed into a vampire to avoid the Seer powers killing her. The Generals realize Eli is meant to be Genevieve’s mate, but Eli knows nothing of love, only war. He finds out her Guardian, her protector and source of life, is a Shifter named Kota whom he hates. He must learn to share not only Genevieve’s affections, but her body as well.

Sex, blood, and battle take Genevieve and Eli on a ride neither of them saw coming.

Eli watched, for the second time tonight, Genevieve’s eyes go from white to hazel. He could see the artery in her temple throb with the pressure in her brain. A trickle of blood ran from her nose down her lip. He reached into her mind and eased her to sleep. She’d need her rest if the transformation were to happen so soon.

“Do you not know why you can hear her? Or why your mere presence eases her pain?” Josiah, another General, asked as he moved a strand of hair away from Genevieve’s face.

They all looked at her like the most important thing in the universe. As Eli gazed down at her, he realized he felt the same way. There wasn’t a single thing in the world he wouldn’t do for her. The pull he’d felt for her before was nothing compared to what he felt now.

“You, Eli, are her true mate,” Sophia said, a hint of something in her voice Eli couldn’t recognize.

Eli nearly dropped Genevieve when Sophia’s words sank into his mind. He was a warrior who knew nothing of love or being mated. He looked from Genevieve to Sophia and back again, still not completely comprehending what the hell was going on. He looked to his left and saw Asa walking towards him.

“Let me take her while you get your head together.”

As Eli passed her from his arms to Asa’s, he felt an immediate emptiness. When he pulled his hands away and broke the last physical connection, she woke up with a scream, grasping her head. Blood came out of her ears and nose. He grabbed her again, pulling her so tightly against him he feared he’d crush her. A menacing growl rippled out of him as everyone tried to get to her. He knew they were only trying to help, but some part of him snapped when she screamed. Some deep part of him he’d never knew existed lashed out and vowed to protect Genevieve.

“Come, Eli, bring her inside,” Josiah said with a sweep of his arm towards the door.

Eli carried her inside and to the closest room. He wouldn’t risk separating himself from her again. He sat down and cradled her to him, his watchful eyes sweeping the room for anything that could harm her.

“Just give me a minute to talk to him,” he heard Asa say from behind him.

A moment later, the doors closed to the room they were in, and Asa stood in front of him. Eli never paid any attention to all the folklore about the Seer. He knew one existed many, many centuries ago but had been murdered by the Fallen. Other than that, he really didn’t know that much about the Seer. Up until Genevieve dove into his soul, all he’d cared about had been killing the Fallen, protecting the Generals, and the sanctity of the vampire race.

“Eli, this is some serious shit, my man,” Asa said, leaning against the table in front of Eli. “How much do you know about this?”

Asa was nearly six hundred years old and witnessed firsthand what the loss of the Seer did to the race. If anyone knew about all this, it would be him.

“Other than the original Seer got murdered by the Fallen, not much.”

“Oh, hell.” Asa scratched the back of his neck. “Eli, you’re a part of her now, not half as much as you’ll be after the transformation, but still, you are hers. Separate, you are both strong fighters, but together you are nearly unstoppable. You’re the only one that can transform her—”

“Not the only one,” Eli interrupted bitterly.

“Do you know who the Guardian is?” Eli asked through gritted teeth. He’d do what he had to do as long as the Guardian wasn’t—

“Yeah, I figured that’d be your reaction.”

The one son of a bitch Eli couldn’t stand was about to become one of the most important beings in Genevieve’s life.

Genevieve began to move, letting the music move her. She wrapped one arm around Eli’s neck, her hips moving in tandem with his. Eli’s hands glided up her thighs, and the higher he went the harder his cock got. Feeling his reaction to her body caused her pussy to drip with want. The feeling only increased tenfold when Kota moved in behind her, his chest pressed tightly to her back. He trailed his finger down her arm. The sensation of Eli, Kota, the music, and the alcohol had Genevieve ready to explode with desire.

Before she realized, she pushed Eli towards the dark corner. As she guided Eli backwards, she grabbed Kota’s hand and pulled. The lingering people standing around were easily controlled with Genevieve’s mind. The feeling of both men and their excitement spurred her on. Not caring they were in a crowded nightclub, Genevieve pushed Eli until his broad back hit the wall with a thud.

Wrapping one of her legs around Eli’s waist, she moaned loudly as his hand reached between them and freed his cock. She shifted her hips slightly, causing his dick to plunge into her hard and fast. He grabbed her face in his hands and kissed her hard. She felt the growl start in his chest and roll up his throat.

“Fuck me,” she ground the words out as Eli thrust into her as hard as he could.

She realized why Eli kept growling when she felt Kota’s hand slide around her ribs and grab her breast. The thought of having them both inside her tipped her over the edge, and an orgasm slammed into her. Kota squeezed her breasts with his right hand as his left freed his erection. She knew it wouldn’t hurt because she could feel her body prepare for his entrance. Genevieve’s body accepted him easily, and his movements were fierce.

Eli gripped her hair. He pulled her head to the side, exposing her neck. She felt his teeth as he ran them along her jugular vein. She flinched slightly when the sharp tip of his fangs nicked her skin.

He ran his tongue over the puncture wound, moaning when her blood coated his tongue. “God, you taste good.”

Genevieve threw her head back and rested it on Kota’s shoulder. She put her weight into him as she angled her hips, so both of them could go deeper. She looked at Eli’s face as he moved with brute strength in and out of her slick pussy. His strength was evident in everything he did. She felt Kota move as well. His grace and speed were unmatched by any other being on this earth.

They were a tangle of limbs, their bodies slick with sweat and desire. Kota’s hands caressed her stomach and breasts. Eli gripped her hair and kissed her until she came again. She felt how wet they made her. The moisture running down her leg was proof of how wanton she had become. She moved her hips faster and put a little more force into her movements. Both men growled and moved with her.

The lights of the club bounced off their skin, making them look odd shades of purple, blue, and red. The music still pounded, but it became background noise to Genevieve. The real music to her ears was the erratic beat of Eli’s heart and the eerie snarl from Kota when Eli got rough with Genevieve. She loved the slick sound their bodies made as they moved as one. The word fuck or yes or the way her name sounded as it rolled off their tongues.

Genevieve’s body tightened. Her cunt quivered before she exploded in ecstasy, taking both of them with her. Kota gripped her hips and pushed as deep as he could into her ass as he came hard. Eli buried his fangs into her neck again as he cock spilled his seed inside of her. She screamed as she fell into bliss, her body trembling, vibrating in total pleasure. Sex made humans tired, relaxed, and knocked them out for hours. Sex made vampires and shifters stronger, and eager for more. 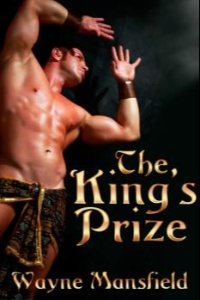 The Sub Who Switched (MF)
Jennifer Denys
In Shelf
$4.50
Tweets by
sirenbookstrand