A lawyer and ad executive during the week, Eddie and his buddy have big plans for the weekend. They’re going to drive up to Hyannis, rent a small cabin cruiser, and luxuriate in the life of ease anchored somewhere off the coast. Their plans don’t include picking up a hitchhiker, but he’s so hot, they can’t resist. Holding a sign saying he’s hitching to P-town means there’s a major party waiting to happen, so they pull to the side of the road and give him a ride. 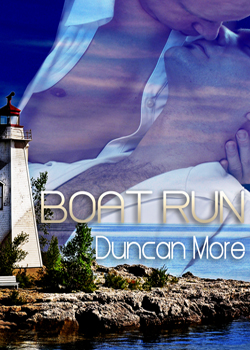 I called Eddie and ran the plans past him, and called Dave’s Rentals to reserve a small fishing boat or cabin cruiser. I told him how to stock it, charged it all like a patriotic American, and called Eddie back to confirm. I have to admit that Eddie can go from a preppy looking junior law partner to a pure tramp/sleaze in one hour or less. In a little over three hours, we were just outside of Bedford and all at once Eddie hollered at me, “Stop the car.” I’ve learned three things about Eddie over the years of road tripping when he’s on shotgun patrol and gives that command. One is that he has to piss like a racehorse, or I just missed the hottest hunk in the universe hitchhiking his butt off, or I missed a turn off. And in two out of three cases, it’s wise for me to stop. Five hundred yards or so behind us was a guy in cutoff jeans and a tank top.

“Only for you, Eddie, only for you,” I jokingly complained. I put the car in reverse and slowly began backing up.

As the hitchhiker jogged up to the side of the car, Eddie looked at his sign and said, “P-town, huh?”

“Yeah, I’ve got friends up there and thought I’d visit for the weekend.” He looked in the car and figured we were safe. Hey, two guys, upper twenties, dressed in vacation gear aren’t exactly going to an Elks Convention.

“Friends, huh?” said Eddie, impressing the guy’s own words back on him. We both knew what he was going to do with any guy he could find during a wild party weekend. We had done it, Eddie and me – parties at The Boat Slip, drag shows at the pre-fire Pilgrim House, midnight trips to the monument, twilight whale watching. We’d done it all at one time or another, just never with each other. “We can give you a lift as far as Hyannis if you want.”

No fool, Eddie. He opened the door and stepped out. He told him to toss his backpack into the back of the car, and hop in the front because the air conditioner worked better. So now we had this young hot puppy sitting between us for at least the next forty minutes or so. Eddie’s legal technique of questioning soon had the guy telling us his complete biography. We knew everything about him except his social security number.

Eddie and I had worked out the auto routine over the years. Trapped between us, Eddie would keep him talking and switching from general to sexual topics, while I, as the driver, would begin making the lower leg contact – you know, the hand off the steering wheel to push in the cigarette lighter and then resting on my knee but also touching his, then getting the lighter when it was ready, lighting a smoke, offering a smoke, returning the lighter, and making contact again with flesh. Then leaving it there for a bit and slowly moving it up the thigh.

By that time, the intended victim would be giving implied consent, or gently brush our hands aside and let his own rest there as a guard/protector. This guy had been hitching long enough that he knew the game so well he beat me to the lighter opening gambit. He just stretched his legs apart a little until he was pressuring our legs, and said matter of fact, “If either or both of you want to party tonight in Hyannis, I’m game, but I will need a ride all the way to P-town afterward or tomorrow morning. Is that agreeable?”