Steven woke up to an alarm clock sounding on the nightstand on Jack’s side. He raised his head over the sleeping Jack to look at the time. “Eight in the morning,” he muttered to himself. His eyes were dry and he was still sleepy. He looked outside. It was raining, so there was not much sunlight. Countless droplets landed against the window.

Jack began to stir, his back facing Steven, but didn’t wake up. The alarm continued to fill the room with an annoying and constant beep, beep. In a daze, Steven dragged himself over Jack and reached for the clock. Why did the bed have to be so big? He could barely reach it. Instead, he got on all fours on top of Jack, wobbling, and pressed on any button that he could see through half-lidded eyes.

The room was finally quiet. Only the soothing sound of rain drops spraying against the windows outside remained. Steven crawled backward and rested his hand on Jack’s side for support. His body was like jelly. He sat and looked around tiredly. It was dark and the room was warm. Steven closed his eyes slowly and began to nod off, almost falling asleep sitting up.

Steven jolted awake and blinked several times. He looked down at Jack. “I do weird things when I’m half asleep,” he mumbled and slid under the covers. His heart skipped when Jack turned to him. The oddest thing was that he remembered what he did, and he’d touched Jack.

“Knowing these things about you is interesting,” Jack said. “I don’t want to get up, but we have to go pay a visit to the queen. At this time, demons are typically sleeping. We usually get up at nine, rarely before that, and we stay awake until later. My world has a single, strict culture, so we have certain habits that have been set since I can remember.”

That was interesting and all, but did they have to see the queen already? Steven sighed. “I haven’t been sleeping well these past few days. Waking up at this hour is not my thing. I don’t have to work on the investigation, so I’ll try to get some sleep when I’m sure that no one is going to kill me.” He was extremely curious to meet the queen. During his investigation, no one had mentioned a queen, so he was certainly going to meet someone barely any human knew existed. His best guess was that humans could become too curious to know her location. He himself had been hired to find the higher-ranked demons, after all.

But he really wanted to sleep. Steven closed his eyes.

“Steven, we have to go,” Jack whispered. Steven opened his eyes, but only for a few seconds.

Steven regained consciousness once he felt something warm on his cheek. He opened his eyes quickly when he realized that it was Jack’s hand. He stared at Jack. The demon’s blonde hair was a mess. “I’m wide awake,” he blurted out. Jack kept his hand on his cheek. Steven swallowed dryly when Jack moved his face closer, his green eyes on Steven’s lips. Instead of pulling away, Steven lay still and waited. Would Jack do it?

Jack dampened his lips with his tongue for a second before he pressed a kiss to Steven’s lips. The demon grew more confident and slid closer. Jack caressed Steven’s cheek to the back of his head, all the while deepening the kiss.

Closing his eyes, Steven slowly kissed Jack in return. Their lips moved together until Steven parted his, and Jack invaded his mouth with his tongue. As they caressed and swirled their tongues against each other, Jack rested his hand on Steven’s lower back and pressed their bodies together.

Steven’s mind had blanked completely. He slid his leg over Jack’s as they continued to kiss. He was forced to breathe through his nose, or end their kiss. Things were starting to heat up underneath the covers too. When they eased back to a few pecks on the lips, Steven opened his eyes and pulled away a moment later. He had to work to control his erratic breathing. “I wasn’t expecting that,” Steven mumbled. His heart pounded in his chest and his cock had gotten half-hard.

“Me neither,” Jack said quietly, gazing at Steven. “You kissed me in return, so can I assume that it’s a good thing?”

All Steven could do was shrug. Even though he’d only known Jack for about a day, it was as if he’d known him for much longer. Almost as if they were supposed to be together. Although he didn’t have the same instincts as demons, humans also felt that way, but on a smaller scale. “We should get ready to see the queen. She shouldn’t be kept waiting.

Jack led Steven to the couch and they took a seat. “It’s all in the past now. I don’t want to think about it,” Jack muttered. He rested his arm over Steven’s shoulders. “More importantly, I missed you.”

Steven moved up and kissed Jack. “I missed you, too,” he said quietly. “When we went there, one of the prisoners said that he’s my mate. Mera told him that I already had someone, so he left. I didn’t know that demons having mates depended on the person’s compatibility with others. I learn something new every day.”

“If he gets out and sees you, there’s a high chance that he’ll try again,” Jack said. “Try to be with a strong demon at all times. If you start working at the FDP, I won’t be there for you as readily.”

With a nod, Steven leaned against Jack. “What are you cooking?” The more time Steven spent with Jack, the more he felt the need to express his affection for him. Now he wasn’t sure if it was too early. For Jack, the demon already knew what he wanted. Jack had only been waiting for Steven’s confirmation. On top of that, Steven knew perfectly that Jack didn’t plan to stop loving him. The hesitation was there, and Jack most likely knew about it with the help of his power.

Steven shook himself back to reality when Jack stood and went to the kitchen area. Should he say it? He knew about his feelings for Jack, but he didn’t want those words to be empty. Saying them just because he wanted to assure Jack of his feelings wasn’t the right way to go about it.

“Why are you anxious?” Jack asked from the kitchen.

That wasn’t a guess. Jack knew how Steven was feeling. At least it made Steven want to communicate with Jack. “I’m worried about telling you how I feel.”

“About what?” Jack asked as he turned off the stove. “Come over here. I’ll serve us lunch.”

Steven made his way to the high center island of the kitchen area and sat on one of the chairs. “About you,” he answered, and looked down when Jack stared at him. “Like I told you before, expressing…love isn’t casual for me.”

Jack went around the table and caressed Steven’s cheek. “You don’t have to say it if you don’t want to. I don’t mind.”

“That’s the thing,” Steven mumbled. He held Jack’s hand and gazed up at him. “I want to. I just don’t know if it’s too early.”

Jack crouched and kissed the back of Steven’s hand. “Just you thinking about it makes me extremely happy,” he said with a smile. “When you’re ready to say it with the significance that you desire, I’ll be right here.”

Steven’s heart pounded in his chest. He just couldn’t resist Jack’s love for him. “I love you, Jack,” he said quietly. So Jack would stop staring at him in surprise, Steven wrapped his arms around Jack’s neck. He hugged tightly.

Out of the blue, Jack picked Steven up off of the chair and draped him over his shoulder. “We’ll reheat our lunch later,” Jack said as he went up the stairs. He carried Steven effortlessly into his bedroom and laid him on the mattress with a quiet thud.

“You want to do it?” Steven asked shyly. He watched as Jack got rid of his clothes. Steven sat up and unbuttoned his vest and decided that it was best to take off his pants first. Jack was already almost naked.

“Yes,” Jack answered with a seductive tone. Before Steven could do much else, Jack held Steven’s sides with his big hands and picked him up. “Leave the shirt on. You look hot like this.”

Steven had to wrap his arms and legs around Jack for support. “Why are we like this?” he asked. Instead of an answer, he felt a slick finger pushing into his entrance. “Jack, standing up?” He arched his back as Jack began to steadily thrust the finger in and halfway out. Steven buried his face against the curve of Jack’s neck. He shivered when his demon pressed feathered kisses on his neck.

Another slick finger was added and Steven moaned out. “Is it because of what I said? About me loving you?” Without any warning, Jack pressed the head of his shaft into Steven’s entrance. It was clear that Steven saying those words made Jack go wild. Steven sucked in a breath when Jack’s cock was all the way past his entrance, filling him to the brim.

“Yes. I can’t help but want to fuck you,” Jack whispered, causing Steven to shiver at the deep tone of his voice. “If I’m making you uncomfortable, just tell me.”

Steven shook his head. “As long as you don’t break me in half, do whatever you want.” 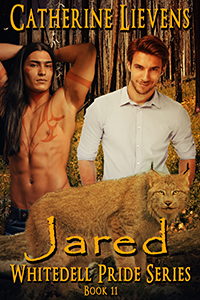