Heat Rating: Scorching
Word Count: 21,227
10 Ratings (4.4)
Fantasy Alternative (M/M, Gay)
In Bookshelf
In Cart
In Wish List
Available formats
HTML
Mobi
ePub
PDF
Cover Art by Harris Channing
Reviews
This was interesting, to say the least. I actually really liked the premise, I just felt that the author needed to expand in some areas. More details on the demons/aliens in terms of their home world, their abilities, their behavior, etc. I felt as if quite a lot was skimmed over and I would've preferred more in-depth.

I really liked Liam. I liked his attitude, but wished more time had been spent on their love story. In some ways it went from Liam thinking Nova was an idiot, to them having sex and falling in love.

So, overall, definitely not a bad read, there were some very interesting parts, but I guess I am greedy and wanted more.

Liam sat up on his bed when he heard footsteps coming closer. The shoes clacked on the floor, and it wasn’t Tom. Tom only wore running shoes. Liam stood and approached the glass, his bare feet stepping on the blue fur carpet he’d picked when they brought him here.

Was a demon going to buy a human?

Only a year ago, demons appeared out of nowhere and invaded four continents—Asia, Europe, South America, and North America, where he was now. He didn’t know where they’d brought him a year ago, but he hadn’t left the United States. He also had no idea if his family was all right, but it seemed that the demons didn’t hurt humans. In fact, he was well fed and apparently ready for sale at any moment.

The footsteps got closer and closer and reverberated in the quiet hallways. Liam could hear someone watching television, but it was in the distance. It really seemed that another human would be bought today. That was one of the reasons why he didn’t make any friends. They could be taken at any moment.

Tom came in sight and greeted Liam with a wave. “There’s someone interested in you,” he said cheerfully.

Liam’s heart sank. There was nothing cheerworthy about that. Liam had to turn his eyes over Tom’s head. No way. This demon was huge. Liam’s head reached the demon’s chest, not even his shoulders. “I will not be bought by anyone,” Liam finally told Tom.

“Come on, Liam, don’t say that again. This is the third demon you're trying to refuse,” Tom said with a pout. “Humans only have two chances to refuse demons. This time is the charm.”

Liam scowled at Tom. “I don’t care,” he said firmly and looked up at the demon. The demon had light blond, almost silver, hair. His eyes were a deep blue. When Tom stepped out of the way, Liam could see what the demon wore. He had a white shirt on and a pair of dark gray suit pants. His jacket sat neatly on his forearm.

“This is Nova Rabbitte. He’s a fire demon, so you’ll have everything you need,” Tom told him. “All you have to do is work for him.” He slumped over when Liam shook his head frantically. “I’m just going to let him in so you two can have a chat and get to know each other.”

What? Liam ran across the room and hid under the desk as soon as Tom reached for the lock that was close to the floor. This was the first time Tom opened the door for a demon to get in.

No. He wasn’t going anywhere!

Liam shivered and his heart pounded in his chest when the glass door slid open to the side. He saw from under the desk chair the demon’s shoes stepping on the soft carpet as he walked in. The glass door was closed and he spotted Tom turning around.

“I’m not going to hurt you,” the demon said.

A subtle cloud of cologne reached Liam’s nose. It was lavender mixed with a spicy scent. “How can I be sure?” Liam mumbled.

Nova crouched and looked under the desk, his head tilted to the left. His wavy hair flowed down his shoulder while his deep blue eyes were on Liam. “How old are you?”

“I didn’t ask.” Nova held one leg of the chair and easily moved it aside. “Are you going to tell me?”

Liam pressed his back against the corner of the desk. Nova was like a wall that didn’t allow him any kind of escape. On top of that, the demon was in arms’ reach. If he wanted to, he could just take Liam with him.

He couldn’t help but shake at the closeness of the demon’s massive body. Liam’s hands wouldn’t stop trembling, and even if he wanted to get up, his legs had gone weak. “I’m twenty-five,” he finally answered. “Why are you choosing me? There are many others you can pick.”

“You’re the one who got my attention,” Nova said calmly and opened his hand in front of Liam. “If you come with me, I can assure you that you won’t be treated badly. I might be a fire demon, but I don’t hurt the weak.”

The weak. Liam frowned. “Where did you come from? I asked every demon I saw and they never answered.”

“Because it brings them bad memories,” Nova said. “Our world had two sides and both started a deadly war over which ruler was the most powerful. It lasted for years, so during that time, skilled demons created a portal that would take all of us to another world. When I left, my world was in ruins. A high number of demons didn’t survive. Some are still out there, not wanting to leave their home and rebuild.”

Liam looked away. “Why are you enslaving humans, then?”

Nova choked on his food and coughed violently, punching the center island with his fist. “Why are you—?”

Liam got up and went around to help Nova. He patted the guy’s back. “Wrong pipe. Calm down, it’s just a simple question.”

It was the first time Liam touched Nova himself. He could feel the tense, covered muscles of the demon’s broad back against his palm and his fingers. He flinched when Nova looked at him, his deep blue eyes locked on Liam’s. It was most likely from coughing so much, but Nova’s cheeks had a shade of red and his eyes had reddened up slightly as well.

Without any warning, Nova wrapped his arm around Liam’s waist and yanked him against his strong body. “Was it that obvious?”

Liam looked away. The proximity between them, their bodies touching, made his heart pound so much that his chest burned. Liam’s breathing quickened and his hands began to sweat in seconds. This was something he hadn’t expected, at least not now.

Nova reached over and rested his hand on Liam’s cheek. The demon move his face closer to Liam’s. Was Nova going to kiss him? Liam clenched his hands at his sides, Nova’s arm still around him.

“Got you,” Nova uttered, drawing Liam’s attention. “What did you think I was going to do, kiss you?” He gave Liam a strange grin.

It wasn’t funny. Liam looked away. “I’m going to eat,” he muttered. When he tried to move away, Nova didn’t let him and pulled him back. Liam looked into the demon’s eyes. “What is it?”

Nova turned to Liam and pressed his lips against Liam’s, sucking in a breath through his nose. The demon pushed his tongue past Liam’s lips and invaded his mouth. His hot muscle swirled against Liam’s in a sensual motion, stopping a few times on the sensitive top of his mouth.

Liam gripped Nova’s shirt with both hands. He couldn’t help but let out a moan when the demon’s hand moved down his back and groped his buttock. The way Nova touched him had Liam shaking in desire. Nova’s eyes slid open as he pulled away. “What kind of sound was that?” he asked faintly, his voice deep and husky.

“I didn’t make any sound,” Liam told him. He reached up and wiped his lips with his sleeve. Nova pecked his lips, surprising him. “What did you do that for?”

“Don’t do that,” Nova said. Liam wiped his lips once more and the demon pecked them again. “I will keep doing it if you don’t stop.”

He didn’t know what to think. It was as if Nova had moved up the curtains and showed his true self. He no longer revealed only signs. “Why?”

“Because I feel like it now.” Nova took Liam’s wrist and placed his hand on his crotch. “You should know that this is your fault. Right from the beginning, when we met at the Human Services. It’s been a while since I felt that I wanted someone to show off to my friends and looked good to me. That's no longer the case.”

The way Nova spoke close to him and how the demon’s hot breathing reached him made Liam’s suppressed feelings surface. Something about Nova had him melting in the demon’s arms, and his hand was on Nova’s hidden shaft. As much as he didn’t want to, a force pushed his whole being toward Nova. It scared him as much as it made him curious. After all, the guy was a demon.

Liam moved his hand away from Nova’s shaft. He then held the demon’s wrist and rose it up to his mouth. Liam moved the sleeve away and bit down on Nova’s forearm. While he swallowed dryly at the sight of Nova’s blue eyes closing halfway, his tongue brushed against the other man’s arm. Liam let out a brief moan when Nova was affected by the action to the point of a quiet growl coming from his throat.

Nova held Liam by his sides and sat him on his lap. The demon slid his hand under Liam’s shirt, on his back, his gentle fingers brushing along Liam’s spine. What was he going to do? Liam shuddered and arched against Nova. The demon put two fingers into his own mouth, wetting them thoroughly before he moved them past the hem of Liam’s pants.

“Wait, what are you doing?” Liam asked as soon as he felt the demon’s wet finger rubbing back and forth against his entrance. Nova didn’t say anything about it. Instead, the demon pushed the tip of his finger into Liam’s entrance, using the tightness of the pants for leverage. “I didn’t say you could do that,” he told Nova. Before he could do anything else, the finger inside of him brushed against his prostate. Liam groaned and wrapped his arms tightly around Nova’s neck.

Nova lapped his tongue at Liam’s neck and pressed a kiss to the wet area. “I won’t do any more than this,” he mumbled. “You stay quiet and just enjoy.”

How could he stay quiet with a finger in his ass? Liam groaned out. Two fingers.

He would tell Nova to stop, but he wasn’t sure if he wanted to. The demon’s fingers fucked him and stretched his entrance thoroughly. “No more than this,” Liam said faintly. Those words were the opposite of how he felt. He desired more. He wanted Nova to use something else. 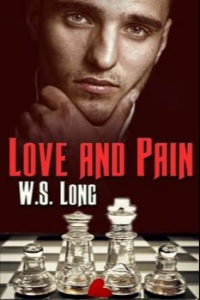