Rough in the Saddle 3

Rough in the Saddle 3

Heat Rating: Sextreme
Word Count: 27,011
9 Ratings (4.4)
Contemporary Western/Cowboys Alternative (M/M, Gay)
In Bookshelf
In Cart
In Wish List
Available formats
HTML
ePub
Mobi
PDF
Cover Art by Harris Channing
Reviews
Once again another wonderful book by Hennessee Andrews! I love how the author makes me feel like I am part of the story. It had my full attention from beginning to end. A beautiful and steamy read!!
Kathryn Laprade
Sizzling sexy smoking hot!!!!! I love this series. Loved Warren and Jesse this was perfect! Love seeing someone finally letting go and getting what they've always desired. Fantastic
donna b buccella
Read more...

More From Rough in the Saddle

Warren thanked them and took a deep breath as they walked away. He had hoped for the elusive eight seconds, but was thwarted by evil. Others could outdo him, sure, but he prayed to be the leader in the point’s game.

A paramedic stepped forward and began the task of checking Warren over, asking where he hurt, prodding and poking tender areas. Cute, Warren thought and smiled. Even though his body ached from head to toe, certain regions were left unscathed. It didn’t matter whether he had cracked ribs, a broken arm, collarbone, or leg, Warren could always summon the energy for any kind of romp that came his way. Luckily, nothing was broken. He knew that right away, but sore? Hell yeah.

“I think you’ll have a lot of bruising, but nothing is broken. You will most definitely be sore for a few days.” The young paramedic was professional as he went about his work. “Rest for a few days and don’t overdo. You should be back on your feet and ready to ride again by next weekend.”

“Thanks, Chris.” Warren stared at the name badge on the guy’s shirt. Chris was young, maybe early twenties judging by his boyish, clean-cut appearance. He had a cute smile and dimples. Warren wetted his lips, pain taking a backseat to desire. “How about I show you how fast I can be up on my feet later this evening.”

“Doesn’t make any difference to me,” Warren teased and let his gaze wander downward.

“Thanks for the offer, but no,” Chris sharply replied and stood up. “Take ibuprofen for inflammation, aches and pains.”

“Ah, Chris, don’t leave me like this,” Warren called and chuckled as the young, hot paramedic walked away.

“Hey, quit hitting on the help.” Jasper King snickered and sat down beside him. “You alright?”

Warren furrowed his brows as if injured by the statement. “Well, hell yes.”

“There is nothing that can keep you down, is there?” Jasper asked and seemed amused. His light hazel eyes twinkled and a wide smile crossed his face. “You’ve got to be the toughest son of a bitch I’ve ever met.”

Warren winked and pushed up from the bench. “All in a day’s work, I suppose. And no, not much can keep me down.”

“A bunch of us are meeting after the rodeo at Lawless Sue’s. They are having a big shindig, cross-dressing contest, and I think an amateur stripper contest. Top prize is two hundred.” Jasper stood up as well, grinning and gave Warren a pat on the ass.

“Two hundred, eh?” Warren asked. If there was a way to make easy money, he was the first to sign up.

“That’s the rumor.” Jasper smiled and tipped his hat. “I’m sure I’ll see you there then.”

“Damn right.” Warren stumbled a bit when he put his weight on his right leg. “Count me in.”

Jasper walked away and Warren watched him go. He and Jasper had hooked up a time or two over the years. The sex had been fair, but nothing to write home about. It was sex, just not the type of sex Warren craved. If he couldn’t find what he wanted, Jasper was always on his standby list.

Warren hobbled along and stopped by a beer stand. There was still a rodeo going on and now he could sit back and watch. When it was his turn, he stepped up. “Bud Light.”

“That’s piss water.” He heard an obnoxious voice behind him call.

Warren turned with irritation already spiking his pressure up. He really wasn’t in any kind of a mood to deal with anyone. “Excuse me?”

“You should have a Miller,” a sandy-haired, green-eyed man replied with a wide grin perched on his lips.

“Listen, asshole, I don’t tell you how to rub your dick. Don’t tell me what I should drink,” Warren stated sarcastically and turned his back to the man. Any other time he would have surprised the guy with a jab so fast he wouldn’t have seen it coming.

“Ooo, feisty,” another voice erupted and Warren realized that assholes came in pairs.

“Simmer down you two or you’re going on the wagon for the night.” A tall cowboy with a deep voice spoke just as Warren turned back around, ready to fight.

“Sorry, we’re getting off on a sour note here. You’ll have to excuse these two, their beloved Miller is talking,” the thick cowboy said and extended his hand. “I’m Zander Wesley, this is John Acker, and Dean Buchanan.”

Warren stared at the trio for a moment, trying to remember where he’d heard those names before. They weren’t there competing, that was for sure. All were dressed in starched jeans, neatly pressed shirts, and shiny boots that hadn’t found anything to step in.

“This isn’t an eight-second ride,” Jesse replied in his magically smooth voice. “Don’t worry. I’ll give you what need.” He hooked his thumb under the edge of Warren’s briefs and inched them down. When Warren’s cock was freed, Jesse licked it from base to tip with a light skim of his tongue.

If Jesse’s plan was to drive Warren completely mad, it was working. He had spent the better part of the last hour hard as steel. The ache radiated outward and laid siege to Warren’s muscles that clenched tight with anticipation. Before Warren could allow his frustration to escape his lips, Jesse pulled his cock deep into his warm mouth.

“Fuck!” Warren writhed with pleasure. Jesse wrapped his tongue around the girth of him and began to inch up and down. He sucked hard with his mouth as he neared the top, his warm saliva dribbling down, and adding lubrication for his hand that circled Warren’s pole and began stroking.

Warren felt his balls draw up. Jesse had him so hot he knew he wouldn’t be able to last long. His cock swelled so painfully he groaned and grinded his teeth together. Jesse let go with his mouth and watched as his hand moved up and down Warren’s shaft. He grinned as if impressed by the effect he had on Warren. Pre-cum dribbled from the tip of Warren’s cock and Jesse flicked his tongue through the slit with a moan vibrating from his lips, causing Warren suck in a large breath of air.

“I’m so close, Jesse,” Warren warned him. He felt weak and vulnerable all of sudden. It wasn’t like him to blow so quickly or to beg. What was it about Jesse that was changing all the rules?

“Not yet.” Jesse smiled at him and sat back on his knees. He tugged at his belt, keeping his eyes directly focused on Warren as the leather popped through his belt loops.

Dear god. Warren felt electrified and became short of breath. Fear made goose bumps rise over his skin and sweat break out over his brow.

Jesse stood up and tossed his belt onto the bed. He winked as he kicked off his boots and unbuttoned his jeans. Warren inhaled a shaky breath, his nervousness somewhat subsiding. He sat up, eager to watch Jesse undress in front of him. Clothed, the man was sinfully hot, but Warren couldn’t wait to see what lie underneath.

On his knees, Warren watched as Jesse took his time with each button of his shirt, nearly demanding that he hurry the fuck up. Inside, Warren was a mess of bunched-up nerves. His cock was so swollen he wanted to stroke one off in order to get the pain to go away. Jesse had control over him unlike anyone Warren had ever been with. His demeanor was cool and collected, like a mob boss ordering a hit like life wasn’t a big thing as he puffed on a cigar with a drink in his hand. Who in the world was this man, and why in hell was he giving his control to him?

Jesse tossed his shirt to the floor, revealing his wide chest, perfectly toned abs and pecs. His nipples were as hard as was his cock that poked out of the top of his underwear. Warren felt his mouth water. He scooted closer on his knees and grabbed Jesse’s jeans, pulling them down, unable to wait any longer. Jesse chuckled and ran his fingers through Warren’s hair, directing him to come closer.

“You’re killing me,” Warren admitted and jerked Jesse’s boxer briefs down. He instantly lost his breath. In front of him was the largest cock he’d ever laid eyes on. “My god!” Warren gasped out and grabbed Jesse’s shaft, eager to taste him and wrapped his lips around his girth. He hummed as the salty sweet taste of pre-cum excited his taste buds. He struggled to please. Jesse was so big around he struggled to suck it.

Jesse moaned and gripped his hair tightly between his fingers. Warren worked, bobbed up on down while he caressed Jesse’s sack. Most of time, Warren preferred to top, but now he felt his tight hole clench firmly, eager to feel Jesse stretch him wide. Giving up on a proper blow job, Warren tongued the length of Jesse’s cock and sucked his balls, one at a time into his mouth.

Quivering from excitement himself, Warren once again pulled Jesse’s cock into his mouth and stroked his pole with his hand. Bobbing up and down, Warren took him in as far as possible, wanting to please him in the worst way. Jesse lovingly caressed Warren’s face and hummed with satisfaction. Something about the man made Warren want to please in a way so uncharacteristic of his usual self it was frightening. His scent pulled at Warren’s senses, delighted him, made him dizzy and crazy with lust. And his bright blue eyes? Warren could get lost in them. The color reminded him of the wild blue waters off a tropical paradise he had only seen in pictures. Then there was his cool confidence, his gorgeous face, and fabulous body. Warren got lost in the moment and strove to please. Before he realized what he was doing, he was plunging up and down Jesse’s shaft so fast and so hard he was sweating and had become short of breath.

“Easy,” Jesse coaxed and held Warren’s head in his hands. He stepped back, pulling free from Warren’s mouth and helped him to his feet. He smiled and pulled Warren to his lips. “That was fantastic.”

Warren trembled with his breaths rapid and unsteady. He placed his hands to Jesse’s chest and dragged them down, loving the feel of the hard planes beneath his fingertips. They stared at each for what seemed like an eternity, but in reality was only a brief instance.

“Do you think you can take me?” Jesse asked and nipped Warren’s bottom lip.

Caught in a Web of Intrigue (MM)
Diana Sheridan
In Shelf
$3.99 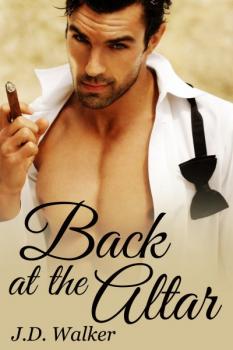