After her sister dies, Marley Jacobson lets fate choose her new home by throwing a dart at a map. She and her sister had shared dreams of the kind of place they wanted to live. When the dart lands on Silver, she goes there to discover it’s the perfect place for her to both heal and to settle her sister’s affairs.

Marley doesn’t have plans for love and romance at this point in her life. Love will come later, when the grief and guilt lessen. What she hadn’t planned on was meeting two charming, sexy men. Grayson Evans is the sheriff. Roarke O’Malley is a businessman. They’re perfect for each other as longtime partners. She learns they’re searching for their third, a woman to love and live the rest of their lives with. As she gets to know them, she decides they would be perfect for her, too. Can she get beyond her grief and guilt to give them a chance? 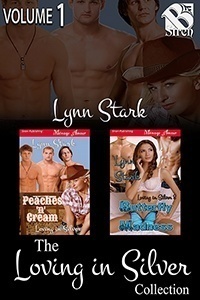 Fabulous. The description ricocheted around in his head as Roarke stared in disbelief.

The woman, somewhere in her late twenties or early thirties, turned away from the shop window she had been looking in to continue down the sidewalk. Roarke tried to get his tongue back in his head as he made the decision to follow her. It wasn’t much of a decision. And if Gray was there he would say he was using his little head to do his thinking. There wasn’t a ring on her finger. He took that as a sign that he should investigate further. His gaze roamed over her, noting everything from the top of her head to the bottom of her feet.

She had lightly tanned skin, long, slender limbs, waist-length sable hair, and butterflies. Roarke had never given much thought to all those things combined, but now he thought they were all perfect together. He admired the short white top and flirty, peach-colored skirt she wore. Yeah, he could appreciate butterflies as they danced over the woman’s slender waist and up, he suspected, under the short shirt she was wearing.

As he followed her at a distance down the sidewalk, hoping he didn’t look too much like a stalker, he pulled out his phone to call his lover and partner Grayson Evans. Gray was the sheriff, but it was his day off. They were supposed to meet for lunch and plan what they were going to do that night. His eyes admired her long, tanned legs downward until he saw the string of small shells around her left ankle. Nice.

What the hell was Gray doing? he wondered as he listened to the phone ring. Roarke couldn’t follow the woman much longer before she started getting suspicious of his behavior.

He and the other man had been partners for years and, being citizens of Silver and following what seemed to be tradition for many men in the town, they were planning on finding the perfect woman to share for the rest of their lives. As he watched that flirty little skirt dance around fabulous thighs, Gray finally answered his phone.

“Don’t know. I’ve never seen her before. Where are you?”

“I had to come into the office. I had to talk to Cherry. Let me know where you are and I’ll catch up with you.”

The sheriff’s office was only a few blocks away. It wouldn’t take long for Gray to catch up, a couple of minutes at most if he got his ass moving. “She just turned onto North Silver Street. When you see her, if she’s not the hottest thing you’ve ever seen, I’ll give you a blow job.”

Gray laughed huskily. “You’ll give me a blow job anyway.” There was a moment when Roarke could hear his lover and friend speaking to someone else. There was soft feminine laughter and he guessed Cherry Preston, Silver’s newest deputy, was there with him. Gray didn’t have a shy bone in his body, and he knew Cherry well enough to know she wouldn’t be shocked or horrified to hear him speaking as he was. “I’ll see you in two minutes.”

The sexy butterfly woman stopped in front of another shop. This one was a leather goods store which had been around since the nineteen thirties. He loved going in. The first thing he always did was breathe in the scent of leather. Harry, the grandson of the founder, was an artist, and his products, everything from belts to custom handbags for women, were always in high demand by the residents of Silver as well as the many tourists who visited their charming town.

Roarke tried to look inconspicuous as he stood there, about twenty feet away, but it was damned hard. He was feeling very conspicuous, as if he had a flashing red light attached to his hat. Where the hell was Gray?

The woman turned suddenly to pin him where he stood when Gray appeared at his side. A strong arm slid around his waist, pulling him close to a very hard, muscular body. A shiver of pleasure ran over his skin. It always did. Gray’s touch was something he eagerly welcomed or sought out.

“Hey, babe,” Gray murmured next to his ear, nipping his earlobe before pulling back.

The woman looked from Roarke to Gray, seeming to examine them both for a moment. He saw her visibly relax. Then she was smiling, nodding in a fairly friendly manner, then turning back to continue her self-guided tour along the sidewalk.

“That was close,” Roarke said, relieved she hadn’t started screaming for help. “Isn’t she gorgeous?”

Gray nodded as they watched her walk along, her hips twitching enough to make the skirt dance back and forth across the backs of her thighs. They waited until she was a couple blocks ahead before they started following again.

Roarke laughed at Gray’s eagerness. “I think we should ask her name first, don’t you?”

“No time to chicken out. Tell me what you will do for this.”

“Marley, tell me,” he said in a stern, no-nonsense tone.

Lord, he was going to explode right then and there. What had happened to the shy, prim miss they had met just a day and a half before? Obviously she had leapt off a roof somewhere in Silver and left this woman in her stead.

Placing the dessert box on the desk, he reached out to caress the side of her face. The tips of his fingers stroked down to her delicate jaw. She looked up at him, a combination of fear and excitement in her eyes. Obviously Marley didn’t have a lot of experience with these games. He could help her with that.

“Is that it? Just one little blow job, Marley? It’s an awfully tasty treat. Surely it deserves more.”

“Do you have handcuffs?” she whispered, licking the lips he wanted to see wrapped around his cock.

Was the woman trying to kill him? His cock thumped impatiently at his zipper, demanding to be released. “Yes. I have them. What do you want?”

“I want you to handcuff my hands behind my back,” Marley told him in a rush, her voice again little more than a whisper.

Reaching behind his back, Grayson took the handcuffs he carried in a small pouch. With his hands on her shoulders he urged her to kneel at his feet. It was difficult to bend with a cock that felt as if it had suddenly turned to steel, but he managed to cuff her with practiced ease. Stepping back, he stared down at her, his eyes searching her face for any sign that she wasn’t comfortable. There was no such sign to be found. Relief surged through him as strongly as his desire.

Pulling his buckle open, he pulled the leather back then released the top of the button and zipper. His cock sprang free, throbbing hard, the mushroom-shaped head an angry red. “Open your mouth, baby.” Those beautiful lips parted, her mouth opening as he stroked his cock. When she leaned forward to lick away the pearly droplets seeping from the slit, his breath caught in his throat. His heart hammered in his chest, sending his blood racing like liquid fire along his veins.

When he looked down at her it was to discover those fantastic eyes watching him. He stared into them for a moment before he examined the entire fantastic image of her loving his cock in the most perfect manner imaginable.

“Take more of it, baby,” Grayson growled roughly, grabbing the base in his fist, holding it still as she began working those soft lips around his cock. A soft, mewling sound escaped her as she took inch after inch of his length. “That’s it. Breathe through your nose.” She seemed to have a little trouble and he had to wonder how many times she’d given a blow job. He would be sure to ask later. But just the thought of those being virginal lips wrapped around him was enough to draw his balls up close to his body. “That’s it. Now I’m going to fuck that beautiful mouth of yours, my lovely captive.”

Another soft whimper at that gave him another clue. Their baby really did want to play like this. Those eyes, surrounded by the thickest lashes he had ever seen, stared pleadingly up at him. Releasing his cock, he slid his fingers through her silky hair. When her mouth continued to slide down the length of his rigid flesh, and he felt her jaw slacken, he pulled back slightly. A whimper of protest reached his ears. Smiling, he stroked her cheekbones with his thumbs before sliding back into the wet heat of her mouth. Within moments he was fucking her mouth. Not hard, not enough to scare her, or make her change her mind, but enough to keep their impromptu game exciting.

“You’re so beautiful, baby, with your mouth sucking down my cock. Maybe I’ll buy you chocolate every day.” There was a growl this time. “I want to see just what you’ll do for it.” She closed her eyes, her entire body relaxing, as he continued to slide his cock in and out of her mouth. Her tongue stroked him, teasing him, rubbing the ultrasensitive spot beneath the head. Her breath blew through her nose as she exhaled, caressing his skin. His balls tightened even more. He was so close. “I want to fuck your mouth hard. Let me fuck your mouth hard, baby. Please.” 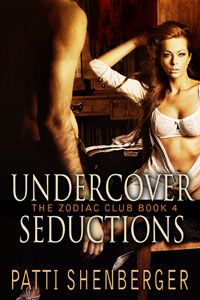 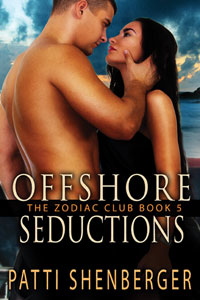 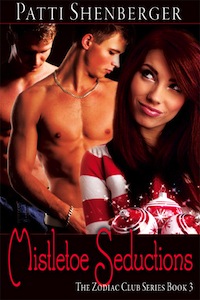 Friends Like These (MF, MMF, MFM)
Tymber Dalton
In Shelf
$4.99
Tweets by
sirenbookstrand