In the parking lot behind Hadleigh’s on a hot August afternoon, Tyrell and Leo gave no quarter as they fought one another for the ball, shooting hoops while they shot the breeze. Their bare torsos were bathed in sweat as their competitive natures turned their workout into a war of attrition.

Leo fell on his butt as Ty shoulder charged him, got possession of the ball, leapt athletically several feet into the air, and scored a slam dunk.

“I’ll give you that one, buddy,” Leo said, laughing as Ty offered him a hand and pulled him to his feet.

“You’re getting slow, old man,” Ty replied, flopping onto the bench and toweling the sweat from his brow. “You never would have let me get past you like that back in the day.”

“I went easy on you.” Leo flashed the killer grin that regularly had the female clientele at Hadleigh’s creaming their panties. “Seeing what day it is.”

Ty grabbed a bottle of water, tipping his head back and half its contents down his throat. “Sure you were.” He pushed the soggy hair away from his eyes and looked up at the crystal-clear sky as he put the water aside and continued to towel down. “Damn, it’s gonna be a hot one.”

“Tell me again who just landed you on your ass.”

“Since our housemates all found a better form of exercise, we’ve been short of bodies out here.” Ty grinned. “Can’t say as I blame them for preferring their indoor sports.”

Leo was the first of the six of them to migrate from America to Nevella, a sleepy ski resort set high up in the Pyrenees Mountains between France and Spain. Gradually five more of them, all with different skills on offer, had joined Leo and stayed. The other four now had permanent ladies in their lives, but those ladies had fit right into the pattern of things at Hadleigh’s, and the guys showed no interest in moving on.

“Now it’s just you and me again, bud, like it was in the beginning.” Ty had been the first to join Leo in Nevella. “It’s like old times, us two single guys sticking together.”

“You’ve got that right.” Leo paused. “I’m glad for the guys, but I can’t see myself going down that route.”

“Why settle for one flavor when you can sample them all?”

Both guys leaned against the back of the bench, regaining their breath and enjoying the rare moment of inactivity.

“You sure you’re good with today?” Leo asked, head tilted back, eyes closed.

“We could work something else out.”

It was August, the month of the annual Nevella food fayre. The country was divided into five valleys, each of which was run by an old Nevellian family. There was little love lost between those families, who were, not surprisingly, highly competitive. The feuding went back generations and no one could accurately say how it started. All Ty knew was that it was deeply ingrained and showed no signs of abating.

Leo could only run his empire in Medina Valley with the co-operation of and in partnership with the powerful Pardon family. In other words, Leo did all the work, and Pardon handled the bureaucracy and took all the glory. In the five years that he’d been in Nevella, Leo had turned the valley from a dated backwater into the little country’s premier ski resort and Hadleigh’s bar into the hip après-ski joint. Thanks to Ty’s skills as a chef, it was necessary to book weeks in advance to get a table in the restaurant, even in summer.

The food fayre had been running for three years and brought in an increasing number of tourists, to say nothing of media interest. Ty hadn’t wanted to know about it but Padron was getting insistent. Medina Valley would never beat the competition unless Ty got involved and Ty felt pressured to give it his best shot. So, all his regular help got to have the whole of August off while Ty took four amateurs chosen by a supposedly neutral panel who waded through the thousands of applicants and allocated them on an ad hoc basis to the five restaurateurs involved.

He held out a hand and pulled her to her feet. With his fingers entwined with hers, he led her from the lounge and pushed the code into the door that led to the dungeon. They descended the stairs together and finished up on the viewing platform. There were a couple of subs lounging in the seating area, waiting for some action, but apart from them they had the gallery to themselves. Ty acknowledged them with a wave that they returned. Jodie didn’t appear to notice them.

“This is it?” she asked, eyes widening as she leaned against the railing and looked down into the dimly lit play area beneath them.

Dimly lit, but it was still possible to clearly see what was going down, which was kind of the point of the gallery. Ty knew that those playing out their fantasies would welcome an audience, especially if they realized that Jodie was a dungeon virgin.

“Oh my,” she said, swallowing audibly. “My God, that’s Tanya kneeling there having that whip brought down over her arse.”

“Does she look like she’s in pain?” Ty’s arms leaned on the railing on either side of her, trapping her there. His cock was painfully erect. He unsnapped his jeans and unzipped, sighing with relief when it sprang free from the confines of his jeans. He grabbed it with one hand and rubbed it against the crack in her ass. “Like that, darlin’?”

“Did you say something?” He removed his cock and tapped her butt lightly.

Which wasn’t what he’d asked her, but he allowed her to be evasive, just this once. “That’s what I thought.”

Standing naked and very erect over Tanya, whip in hand and breathing heavily, he glanced up and waved at them. Then he threw the whip aside and knelt behind Tanya, entering her hard in one fluid movement.

“Only several times a day. Every day.” He paused. “Notice anything about the ladies down there? And some of the men, too?”

“Yes,” she replied slowly. “I think I see what you’re getting at. Very few of them are stick thin, the ladies that is, but they don’t seem to mind showing themselves off.”

“That’s because their Masters like them just the way they are and worship their bodies.” Ty nuzzled her neck. “Tanya had real hang-ups about her size when she and Ward first hooked up. It took her a while to accept that Ward really does like her just the way she is. He’s an ass man, in case you didn’t already get that part, and Tanya’s ass is built to take all the punishment he dishes out. And she loves every minute of it. It’s a win-win situation for them both.”

“I can see that.” She licked her lower lip with the tip of her tongue as she continued to watch them intently. “Is that Leo over there?” she asked, pointing.

“Evidently,” she replied when Leo turned and she got an eyeful of his impressive equipment fully extended. “Why isn’t anyone embarrassed to see me watching them?”

“They liked being watched, sweetheart. It enhances their performances to know someone new to the game is looking on.” Ty’s hands worked their way beneath her top and efficiently unfastened her bra. He pushed it away from her heavy breasts and covered them with his hands instead, pinching hard at her nipples. “Can you imagine yourself down there, doing all that stuff to make me happy?” he asked, his voice a throaty whisper against the shell of her ear.

“It’s okay, sweetheart.” He nudged her legs apart and slipped his cock between them, rubbing it back and forth in a parody of the activities going on below them. It would agitate her clit and help to loosen her up. Not that he planned to do anything about her needs. Not quite yet. She needed to be desperate, begging, absolutely sure she knew what she wanted before he gave it to her. “We’ll get you over your hang-ups. I guarantee it.”

Except, with Jodie, it would be anything but boring.

To her credit, she barely flinched, her gaze still glued to the activity taking place below. Someone Ty didn’t recognized was chained to the St. Andrew’s Cross, taking a whipping. Tanya was still on her hands and knees, huge tits dangling below her as she took it up the ass. The action was hot down there tonight, or perhaps it just seemed wilder than usual because he was watching it through Jodie’s eyes.

“That’s my good girl,” he purred. He’d been wrong about her tits. They were too big even for his large hands and spilled over the sides. He molded the firm flesh between his fingers and then pummeled it hard as he ground his rigid cock with equal force back and forth between her legs. “I can tell you like it hard and rough. That’s good. Real good. How do you feel about having my cock up your ass?” 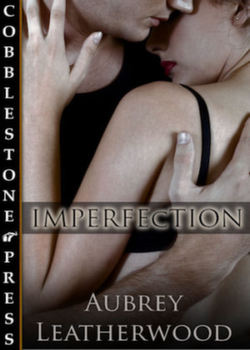