Gregor Kranski had spent too many years alone, trapped without the one thing that could free his soul. When he finally meets his spirit walker and thinks freedom is within his reach, the man comes with a little baggage. Not that you could call a twenty-odd-foot crocodile little.

Darian Ramoth had been kidnapped and forced to work for his family. He was also being used to blackmail his wayward spirit walker. When he escaped, he'd had to leave Jonah Monack behind, but he'd gone with the promise he would return.

Jonah is brutally held for his knowledge and abilities. Darian had managed to escape but is now returning against Jonah's wishes. Not only that, he is returning with another spirit walker. Shifters don't have two walkers, do they?

Heat Rating: Sextreme
Word Count: 41,231
17 Ratings (4.5)
Menage a Trois/Quatre Paranormal Alternative (M/M, Gay)
In Bookshelf
In Cart
In Wish List
Available formats
ePub
Mobi
HTML
PDF
Cover Art by Harris Channing
Reviews
Could not put this book down. This book had the triple threat, three hot men, struggle to keep them together, and a pack that would not let them fail. I love the variety of paranormal shifters involved in the story. The heartbreak of some of the other characters in enriches the story and makes me want more. Can't wait for the nextbook! XD
animelover
Read more...

Gregor was getting as frustrated as Enda must have been when he had trouble trying to find his spirit walker. The scent of Christmas was everywhere, and no one seemed to understand.

He and his brother entered the conference room for their pre-full-moon forum. Daniel was being officially brought into the pack. As Enda’s spirit walker, he had been immediately entered into the pack anyway, but he still had the oath to take along with those tigers. They’d all sneaked in to see Daniel at W&P’s. Hell, he now had a peach jumpsuit thing to show for it. Bloody Percy was a minx.

As they all sat down and the tigers came in, that scent came with them even stronger than before. Gregor growled under his breath, but he really wanted to scream. He didn’t dare, as he had no idea which one of the tigers was his.

Gregor didn’t listen to a word of the business discussed. He was too busy glancing at the men. One was very pale and so beautiful but looked very arrogant and not very friendly. He hoped it wasn’t him. The other two were of a darker complexion. They had an amazing golden colour to their skin. Their hair was a shade darker and streaked with black and gold. Gregor felt his cock go hard so fast it almost hurt. It had to be one of them. One was slightly smaller by an inch at most but more heavily built. His clothing was dark, subdued, black, low-slung jeans that slid over his thighs and hugged his ass. He also wore black boots and a dark-gray T-shirt which outlined his amazing chest. He really could get used to that. The other shifter was very outgoing and flamboyant. His bright-red shirt would have made Percy proud, and he kept touching his friends in a sensual but reassuring manner. That would drive Gregor wild if he was his spirit walker. He’d have to kill those other two for letting him touch them.

Jez started to talk about the men, so Gregor tried to concentrate. Explaining about their work, Angus made a comment about the legitimacy of their collection, as Kash always called it. Gregor couldn’t have that. “Nah, we were the Robin Hoods of the pirate world,” he countered.

“Lord, I hope not. The idea of you in green tights, brother, is enough to put anyone off their work.” The room roared with laughter as Gregor watched the more subdued of the three men. He raised an eyebrow at him just before his unasked question was answered.

“Do bears wear tights?” His smooth, sexy voice floated over Gregor, and he thought he was going to come in his pants. The subdued one was his!

“Mine!” he yelled, jumping up onto the table to get to his spirit walker. As he got closer he felt that magical pull, the feeling of finally being whole. Their spirits were uniting. His walker felt so good. He felt like he’d joined him twice in totally different ways.

As he approached, his walker jumped up, screaming, “Noooo!” He ran for the door.

This wasn’t right. The man looked upset, but there was also confusion in his eyes. Did he not know of spirit walkers? Gregor had to get to him and explain before the man left the room.

“Stop!” Enda bellowed, glaring at Gregor before he continued. “Sit back down both of you, please. Gregor, we will sort this out as men, not animals.”

Gregor was lost. He had to do as his Alpha instructed, but the need to get to his walker was overwhelming.

Gregor sat back down close to the tigers, barely containing himself. He tensed when Jez asked if they still wanted to stay with the pack. The subdued one would. Gregor wasn’t about to let him go. Daniel asked a question, but he didn’t hear it. He did hear the answers though, as he watched each man give his name.

“I’m Assyn Tibet, but please call me Syn,” the flamboyant one said whilst smiling at Daniel. Next came the pale, arrogant one of the three.

He stood up. “I’m T’narr Salem,” he said proudly, nodding his head before sitting back down.

So mine is… Gregor waited for his man to speak. “I’m Darian.” He paused but finished quickly. “Darian Ramoth.” His voice was a contradiction. It was so soft, sliding over Gregor like pure silk. But there was steel in it, a tone so subtle you could easily miss it. This man had power and an inner strength which he didn’t need nor want to show.

It turned Gregor on. His cock was throbbing, his pulse racing, and the object of his need was just there in front of him.

Gregor did not need telling twice. He undid the buttons from the bottom, exploring each inch of skin revealed. Darian moaned as he slid the shirt off his shoulders, running his hands down his long, lean biceps. Gregor shoved the shirt away and explored the skin in front of him. Darian had no chest hair, and he liked the contrast to the soft brown hair that covered him. He liked the feel of it on his chest and the tingle he got when he ran his hands over it. He leaned up, pulling one of the barbells into his mouth. Darian shivered and gasped as Gregor tugged on the metal. Darian leaned down so he could play with the other one. Gregor continued laving attention on Darian’s pebbled nubs as his hands slid lower and ran around his waist. Using his right hand, he flicked open the jeans, and with his left, he slid it down to grip one tight globe of his ass. Popping the rest of the buttons, Gregor slowly pulled the jeans down. Releasing his nipple, he let Darian kick off his boots and rid himself of the jeans. As soon as the clothes had gone, Gregor grabbed Darian and flipped them over before leaning over and devouring him in a kiss. It was frantic, and passionate, desperate, and yet so very, very tender in a strange, aggressive sort of way.

Darian pulled back gasping for breath, lust filling those soft chocolate eyes. “I need you. I need you inside me. I want to feel you fill me, please.” The last word was said in a whisper.

Gregor groaned at his words, quickly searching for the lube. Darian smiled and held out his hand, revealing the tube he’d pulled from the drawer. “Thank you,” Gregor said with a smile filled with anticipation.

He popped the lid and squeezed a liberal amount on his fingers. Darian smiled back, pulling his legs up and revealing his most intimate place. Gregor almost swallowed his tongue at the sight that was before him. “God, you are so beautiful.” He leant down and slowly brushed his tongue over the tight, puckered hole.

“Ah, yes,” Darian moaned as Gregor circled his tongue round the edge of the pink rosette. Dragging his tongue up the perineum, he sucked at Darian’s balls. Darian was now moaning and pushing his hips toward Gregor. He pulled back quickly, licking the pre-cum from the head of Darian’s engorged cock.

Gregor ran his slicked finger over Darian’s hole before pushing in. His finger slid right inside. He slowly slid it in and out, letting the muscle relax around his finger. “More, Gregor, please don’t tease.” Darian moaned as Gregor quickly inserted a second and then a third finger, gently stretching his hole. His twisted them round until he felt the small nub of nerves inside.

Darian’s hips rocketed off the bed. “Now, Gregor, please. I need to feel you,” Darian begged as Gregor looked into his lover’s lust-filled eyes. He could lose himself in those eyes. They spread a warm feeling through him that he couldn’t explain.

“Love?” Gregor looked at him quizzically as he withdrew his fingers. Darian blushed and then groaned at the loss. He quickly recovered when Gregor pressed the blunt tip of his cock to the pulsing rosette.

“Give it to me, fuck me. I need this, you, please.” Gregor smiled at Darian’s disjointed sentence. He must be getting it right.

Gregor paused, leaning over Darian. “You ready, my love?” he asked, his voice trembling with the statement. Darian’s eyes glazed with emotions, and he nodded just before Gregor thrust himself deep inside his spirit walker.

“Oh God, you’re so hot and tight.” Gregor thrust deeper as Darian moaned in pleasure, his body covered in a sheen of sweat.

Gregor began thrusting fast and hard into Darian’s gripping hole. He just couldn’t hold back. He leaned down and sucked on his nipple bars, causing Darian to flinch and then groan in pleasure. Gregor tilted his angle, nailing Darian’s prostate with every thrust. He felt so powerful, grinding into Darian, and Darian took it and begged for more. 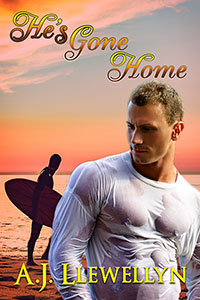