Today was supposed to have been an easy going day. The sun was bright, the air was blessedly free of industrial fog, and the little town just a mile from the encampment boasted a lovely shopping district. Some of the women’s costumes were looking a bit worse for wear and so the resident seamstress had donned a wide-brimmed hat, took a grapevine shopping basket in hand, and made off to find bargains to cannibalize into costumes. The denizens of Mister Machiavelli’s Traveling Circus were taking a day of rest between their last performance and the next to catch their breath and make fine adjustments to their various props. It had been a rather exciting year for the small troupe, not one, but two, transatlantic voyages and a runaway debutante ensnaring the heart of the otherwise intimidating fire breather. His oldest friend in the caravan, the beast tamer, was still not entirely sure how their band of misfits had attracted so much drama so suddenly, but even she could admit the added spice to life was nothing short of amusing. As it was, now that the happy couple was blissfully wed, the shock and awe at last began to dissipate. Walking about in the charming town center was a welcome reprieve from the usually cramped quarters of the caravan. Few of the locals gave her much notice, the veil over her pale curls hid her most noticeable feature, and she chose a purposefully drab walking dress to keep wandering eyes far from her figure. Even though such plain clothes were a full spectrum’s width away from her preferred style, it was a small price to pay so that she might enjoy a calm afternoon free from the crowds and clutter of her everyday life.

But no sooner than walking into the very first store, the universe threw something akin to a wrench into the cogs of Cristabelle’s otherwise happily unremarkable day. There, standing prominently next to the gilded register atop the heavy, oaken, checkout desk was a cardboard display stand. Shockingly white against the dark paneling of the room, filled with colorful advertisements of health spas, historic landmarks, and fashionable means of transportation, it seemed innocent enough. Though on the highest shelf of the display could be read a name that seemed to be pulled right out of her memories to assault her in the present. Shaking off any foolish notions of being intimidated by a piece of paper, she joined a small group of local women as they spoke quickly and conspiratorially about the display. Taking one pamphlet in her doe skin-gloved hand, her blue eyes quickly began scanning the ad.

The brochure seemed to be made simply for the sole purpose of mocking her. In bright red, curling letters the name Wakefield Industries proclaimed the maiden voyage of the undersea faring passenger liner Thetis. Cheerful, little paragraphs touted luxurious accommodations, internationally renowned chefs ready to serve, and powerful, state of the art engines guaranteed to be the swiftest on any ocean. And there, just below the hand-colored photograph of the absurdly ornate pleasure vessel was the framed portrait of the company’s resplendent commander.

Cristabelle Howard fought the childish urge to roll her eyes and set the pamphlet back upon the display from whence it came. A few other curious patrons of the little department store puttered around the boisterous advertisement, crowding the small hallway quite rudely. Apparently, their town had only just become known to the outside world, no doubt some vacationing aristocrats thought them rustic and quaint. That being said, expensive, ocean-ready ships were a new and exciting bit of gossip, at least one would assume. They remarked upon the elegant staterooms and other such fineries, but the majority of the women were far more interested in the portrait of the handsome businessman. Yes, she could admit he was attractive, almost breathlessly so. He was all dark eyes and slicked back hair, a strong jaw and broad shoulders, any woman’s dream really. Any woman but those who actually had productive things to do, and she turned her back on the display to continue her shopping. She ignored the tittering talk of the ladies, both young and old, and set her eyes instead on a rack of lacy shirtwaists. Her concentration, however, was far from the fine stitching on a frilly cuff. Really, her good sense was very ill-timed in its decision to disappear without her permission.

Henry Wakefield, she had not seen him in quite some time, but if pictures were to be believed, he had not lost one bit of that charming disposition she knew all too well. Apparently, his company was doing well, too. Never one to let the world or profit pass him by, it seemed dear Henry had gone and tapped into a new niche of sea going vessels. A sub-mariner ocean liner built, not for trade or cargo, but for passengers. Cristabelle smiled as she recalled the idea when it was nothing more than a drawing on a napkin discussed over dinner. Now they were everywhere, and it seemed her old friend had turned his eye to the Mediterranean. What a coincidence that she should be haunting the very same place which now boasted a port for such vessels. But she never did ascribe to believing in coincidences, though that implication was best left for another time.

Cristabelle leaned back upon the wood, raising her arms to remove the pins from her hat and gently depositing it on the metal hook on the wall. Gloves were removed one finger at a time and pulled free by her teeth, a wicked grin graced her lips when she heard the groan caused by her display. The trip here had been difficult to bear, but now alone in the low light of the locked room, she could relax and prolong the game. Now she could play. How well she knew just how deeply this game would stir his blood; how much taking her time would excite him, bring out the beast in him. Theirs was a game of dominance, always a battle for who would bend the other to their will. This time she might have become drunk on it already, so enthralling was their play after so long a separation.

His coat was left to fall in a heap on the floor, hat dropped on a small table, and the buttons of his shirt were already all undone. She bit her lip and sighed, appreciating the sight. The fabric fell free of his belt and barely clung to his shoulders. The front wide open to the smooth plane of his chest, and the lean muscles of his torso made rock-hard from years of competitive swimming. Deftly, she worked the buttons of her blouse apart, relishing the ever darkening, lustful look in his eyes as inch by slow inch of pale flesh was revealed to his gaze. The gauzy material floated to the ground. She stepped over the fallen article, trailing her fingers across the swell of her breasts which were lifted high and almost overflowing the lacy edge of her corset. Down her slim waist she drew her hands, roaming over her body as a lover might, until they teased and slipped beneath the band of her skirt. He moved around her like a predator stalking prey. She stalked right back, and they danced little circles around one another, moving ever further into the room and closer to the wide, brass bed.

His shirt was soon lost, her blue eyes taking in the sight of the familiar dips and hard expanses of sun-kissed skin she had memorized long ago. His hands went to the closure of his trousers as her own slipped back to the hooks of her skirt, easily prying them free. She gracefully stepped out of the constraining garment. Who would fall first, she wondered?

With firm hands she reached out, assisting him in freeing one button after another, their gazes locked on one another. Through thin, amber curtains the breeze and light of the street lamps cooled and illuminated their exposed skin. With every button freed, her fingers would glide along the newly exposed territory, her hands wandering further and further down the firm line of his torso, grazing the delicious line of his hips towards the trail of dark hair that led her probing touch lower and lower. But just before she might have finished her work, his hands caught her wrists ceasing her movement. Before she might have made a retort, his lips were upon hers, ceasing any thought of speaking, or any thought at all.

His tongue pushed past her lips, her gasp caught by the kiss and silenced. The slick feel of her arousal began to slide between her thighs. She pressed them together, finding only the barest hint of relief. Against her belly, the long, thick form of his cock was growing with every thrust of his tongue within her mouth, imitating motions yet to come. She tried to free her wrists, but to no avail. If anything, he only held on more fiercely, pulling her ever closer against him. It continued every time she made to free herself, a chase of cat and mouse, but with hands and lips instead. She pushed one leg between both of his, slipping between his thighs and pressing into the soft, sensitive flesh still hidden beneath the too tight barrier of his pants. He growled into her mouth. She bit at his lower lip in response. When at last one wrist was let loose, she made quick use of her freedom to caress down his smooth chest, her carefully manicured nails leaving starkly red claw marks in their wake. Between two fingers, she pinched and rolled one flat nipple, gaining a groan and swift nip to the side of her neck in return.

A large hand ran down the line of her body, molding to the curve of her breast, over the swell of her hip and coming down to grasp her thigh through the flimsy material of her chemise.

He jerked her leg high around his waist, throwing her off balance and sending her one free arm to clutch at his body rather than risk toppling to the floor. The new position left her thin skirt hiked around her middle, leaving her legs spread just enough to feel the full length of his arousal pressed deliciously close to her already wet and aching sex.

The Baron and the Violinist (MF)
Silke Ming
In Shelf
$4.50 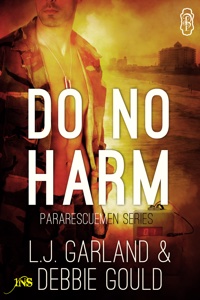