Made Men 8: All or Nothing (MFMMM)

Made Men 8: All or Nothing (MFMMM)

Heat Rating: Sextreme
Word Count: 64,822
15 Ratings (4.7)
Contemporary Menage a Trois/Quatre Romantic Suspense
In Bookshelf
In Cart
In Wish List
Available formats
PDF
ePub
HTML
Mobi
Cover Art by Les Byerley
Reviews
Absolutely loved this book! The part that brought a smile to my face and tears to my eyes was the ending when these big macho men introduce Alda to their mom. Also loved that they held off fully expressing their love for until their mom could be a part of this momentous occasion.
izzy1957
Just OK. I liked Alda and the heroes but didn't find the plot very interesting. I though the way Alda and the men had so many misunderstandings (particularly after sex)--the way each jumped to conclusions seemed childish. I've noticed a pattern with some installments in the series. I find the secondary heroines really interesting and am eager to see them get their own books. But then when they do get their own stories, half the time it's a let down. The fun, feisty person we were initially introduced to doesn't show up in their own book. Alda was so interesting in previous books, but in this one she was a bit flat and uncertain. Anyway, despite the anticlimactic ending, I LOVED the epilogue which was heartwarming and sweet.
SoCalReader
Read more...

More From Made Men

Made Men 10: And Then...There Were Seven (MFMMMMMM)
Dixie Lynn Dwyer
In Shelf
$4.99
All Books In Cart
All Books In Bookshelf
Excerpt

“Need another one, sweetheart?” the bartender asked her, and she shook her head.

“The boss is buying,” he told her and the bartender nodded behind her. She turned to look and there was Logic Foster, one of the Coglonie brothers’ security guys. She felt her heart race and warmth hit her cheeks at the sight of him. Six feet three, wide shoulders, blond hair, and those eyes. Jesus, he had killer eyes, and looking at him made her body react big time. Not smart.

Her mind processed what the bartender had said. The boss is buying. Did that mean Logic owned the place or the Coglonies? She knew the Coglonies owned many places around New York.

“Good evening, Alda,” he said softly to her, yet that deep voice still seemed to penetrate her skin on an intimate level.

“Hi, Logic. How are you?” she asked, sliding off the stool to greet him out of respect one gives to a man of his power and authority in the organized crime world. His hands went right to her hips, then one slid up her back. She felt a mix of emotions as women looked on, admiring his ass for sure, and then sending daggers her way. She felt self-conscious. She definitely didn’t like feeling on display and she stiffened a moment as he pressed closer, looked her over and gave her a wink.

His cologne attacked her senses. His manliness, and the feel of hard muscles and large, warm hands connected with her body.

“Doing well. What are you doing here?” he asked, and kissed her cheek, wrapped his arm around her waist and pressed close to her. She inhaled, shocked by the sensations she felt and by his move. The last few times she bumped into him or spent time with him and Train, they were flirty, but held back, and were even called away for some sort of “business” with the Coglonie men. She wondered how Giada handled her men and their business positions. Logic made her very nervous.

When he released her she instantly felt the loss, which was so odd. Plenty of times men hugged her, maybe took advantage of pressing up close to her and she felt nothing. Logic, on the other hand, made her heart race and her feel like she needed to impress him or something. It was so weird. Did she think she wasn’t good enough for him? Maybe it was all the attention he, Train, Royce and Brew got. Why she pooled them all together she didn’t know, but she did. She saw them as one unit.

He slid his hand at her lower back and looked at the bartender. “She’ll take another one and I’ll have Captain and Coke,” he told the bartender.

She eased back onto the stool and crossed her legs. He stood with his back against the bar and looked at her.

“Thank you for the drink. It wasn’t necessary.”

“I saw you immediately and hoped to buy you a drink. Maybe talk alone,” he said, holding her gaze but sweeping his eyes over her chest. The dress she wore accentuated her full breasts, yet wasn’t too sexy at all. The bartender put the drinks down and he passed her the pomegranate martini. She couldn’t believe what he was saying. Now her nervous meter went up another notch.

“What shall we toast to?” he asked her, holding her gaze. Those deep blue eyes, blond hair and the tight dress shirt in blue he wore showed off his muscles and those incredible eyes.

“Martinis!” Donata chimed in and Alessa, Mickey and Spence laughed.

Logic looked back at Alda as if the interruption annoyed him. His dark blue eyes narrowed, and she could just imagine what a man like him looked like pissed off. She did recall how demanding Royce, Brew, Train, and Logic were when Giada went missing. Royce and Logic had placed guards on Alda as a precaution, which was something that happened before when one of her other friends was in danger. It was the looks in their eyes, the cold, hard expressions, and their commanding orders that interested her. She thought they were flirting several times, and even touched her, caressed her arm, hell, when each of them greeted her hello she always felt a light caress across her ass but it was so quick, so light she wondered if she imagined it. Perhaps she just wanted to experience what her friends were experiencing. The attention, the care, and the protection of made men. Or simply a ménage?

“To martinis,” he said and they clinked glasses. As they took sips, they both held one another’s gazes. Something was brewing here, and Alda wondered what.

Brew undressed quickly, and Train took her other hand, brought her fingers to his lips and kissed them. She was surrounded by four extremely sexy, muscular men, and they all wanted her.

“Oh God,” she whispered as Brew lowered down in front of her, kissing along her belly and the belly ring. The tattoos and muscles were everywhere. His expression so hard, demanding, wild, it both scared her and turned her on. His fingers started to push her panties down, then he pressed his nose to her mound and inhaled against the material. Was that a growl? She shivered.

Simultaneously, Train and Logic leaned down and suckled her breasts. She felt each tongue lap at her nipples and then suckle nipple and some breast into their mouths as if starving to enjoy her flesh. Then came the lick along her ass cheeks and then her crack. Royce. Holy God, four men were feasting on her. With them restraining her, she felt her pussy spasm, and she closed her eyes and moaned.

Royce took her hands from Train and Logic and pulled them behind her back and over his cock. She gasped and wondered how the hell she was even standing up.

“Feel what you do to me, baby. How hard you make my cock. Watching this sexy ass in all those damn tight ass dresses you wear to the clubs. I’ve wanted to see you naked for so fucking long, never mind wanted to sink my cock deep into your cunt,” Royce said, kissing along her neck and rocking his cock between her fingers.

“Really,” he said and suckled her neck on her shoulder.

“We all have,” Logic stated, releasing her breast and licking along the tip again and sucking hard.

Brew took that moment to slide fingers into her cunt.

“So wet for us. My God, Alda, your pussy is sopping wet,” Brew said to her.

Her lips were parted, her breathing rapid, and she felt the orgasm building and building.

“I need a taste,” Brew said, thrusting his fingers up into her cunt, making her moan louder. He lowered to the floor, lifted her thigh over his shoulder and latched on to her clit. She fell slightly back against Royce, unable to remain balanced as she was still restrained and being feasted on. It was so wild. Brew suckled hard as she took in the sight of all their muscles, the tattoos and the way they worked together to arouse her and make her come. She was close. So damn close.

Slowly Royce moved out of the way, releasing her hands. Her back hit the comforter and all four men attacked. Brew was sucking and stroking her pussy, his head between her thighs that were over his shoulders. He was filled with muscles, and loaded with black tattoos everywhere she could see. Intricate ones, wild ones, some scary, some just patterns and designs. Her hands were pushed up over her head, causing her breasts to lift up, her hips to raise, and Royce was there lowering down to kiss her mouth. Train and Logic continued to feast on her breasts, following her movement as they manipulated her body to their liking. Tongues and fingers trailed along her skin, then on her ribs and the tattoo she had.

“You are gorgeous, baby. I never would have imagined you with a tattoo,” Logic said and trailed a finger along the tattoo.

Royce released her lips and Brew lifted his mouth off her cunt. “Delicious,” he hissed. Brew looked at her with determination and desire in his eyes, licking his lips and then lifting a very thick big cock with his hand.

“Mine,” he said and then climbed up higher, spread her thighs wider as the others moved but Royce kept her restrained and Brew began to push his cock into her pussy.

He hovered above her, slid his palms over her breasts, cupped them and lowered down to lick the tips. He was torturing her, nudging his cock deeper and deeper.

“Brew, please. Please,” she begged, widened her thighs and tilted her pelvis up. He slid his palms up her arms. Royce released his hold on her and Brew took complete control. She was shocked at his strength, his size, and very intimidated by the plethora of tattoos and muscles. He pulled back and thrust into her fully. Her lips parted. She felt her pussy stretch to accommodate his thick, long cock. Alda lifted her chin and cried out as he began to thrust in and out of her cunt slowly but with purpose.

“Look at me. Fucking look at me while I make love to you, baby! I told you this was different. Never like this, Alda. Never,” he stated and began to thrust harder, faster, gripping her shoulders and pounding into her body. She loved it. She felt a mix of uncertainty and need and it caused her body to erupt as she cried out her release.

“So hot and sexy. Look at her. Look at our woman,” Train said and reached over and pinched her nipple.

“Oh,” she said and Brew thrust faster and harder into her.

“Never like this, Alda. Never. God damn, her pussy is gripping my cock. Fuck. There. So fucking there,” he said. He gripped her shoulders and thrust so hard and deep she lost her breath, and he roared as he came inside of her. 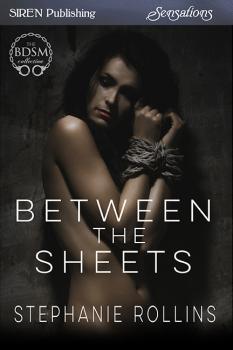 Between the Sheets (MF)
Stephanie Rollins
In Shelf
$3.50